Charlotte of Cyprus was born on 28 June 1444 in Nicosia as the eldest and ultimately only surviving legitimate child of King John II of Cyprus and Helena Palaiologina. She had a younger sister Cleopha, who died young. She had an illegitimate half-brother James, who was the son of her father’s Greek mistress Marietta de Patras. She had an excellent education in languages, speaking fluent Greek and she could also write in French and Italian, and possibly Latin.

She was married for the first time at the age of 12 to John of Portugal, who was the second son of  Infante Peter, Duke of Coimbra, and Isabella of Aragon, Countess of Urgell. He was 13 years older than her. It was to be a short marriage. He was poisoned by his mother-in-law the following year. On 28 July 1458 Charlotte’s father died, and she succeeded him as Queen of Cyprus. She was crowned on 7 October 1458. 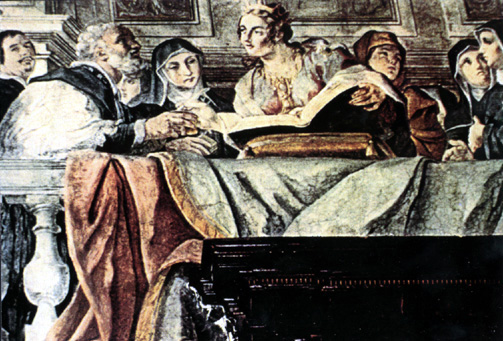 Her succession was challenged by her half-brother James and her reign would be a continuous battle with him. She married for a second time to Louis of Savoy, Count of Geneva in order to receive assistance in retaining her crown. After being blockaded in the castle of Kyrenia for three years, she and Louis fled to Rome in 1463 whereupon her half-brother James was crowned King of Cyprus. She lived in the Convertendi Palace in Trastevere. She was described by Pope Pius II as “a woman of about twenty-four, of middle height: bright eyes, complexion betwixt dark and pale; speech smooth and flowing torrent like after the manner of the Greeks; French costume; manners becoming her royal blood”. She later lived on the island of Rhodes. She was not successful in reclaiming her throne with papal support, even when power passed to James’ widow Catherine Cornaro. She had a stillborn son with her second husband in 1464 and remained childless for the rest of her life.

She died on 16 July 1487, having ceded her claims to her cousin’s son, Charles I of Savoy. She was Queen of Cyprus for just six years. The Kingdom of Cyprus was disestablished in 1489 when Catherine Cornaro sold the land to Venice. Charlotte was buried in the Chapel of Saint Andrew and Saint Gregory at St. Peter’s Basilica.