Elizabeth of Poland was a true survivor. Her long and eventful life spanned three-quarters of the turbulent fourteenth century.  She was involved in some of the fourteenth century’s key events in Poland, Hungary, and Naples.  For decades, even in her old age, she was active in the politics of Hungary and Poland.  She quite possibly was the most powerful woman in fourteenth-century Central Europe. 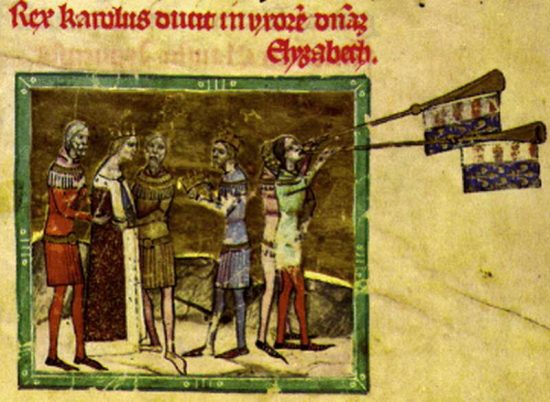 Elizabeth of Poland was born around 1305 as the daughter of Wladyslaw I of Poland and Jadwiga of Kalisz.  She had one older sister, Kunigunde, and a younger brother, Casimir.  Her father was crowned King of Poland in January 1320.  Later that year, Elizabeth was married to Charles I of Hungary, as his third or fourth wife.  With this marriage, the ties between Poland and Hungary were strengthened, and a long period of corporation, especially in trade and politics existed between the two kingdoms.  Charles did not have any surviving children from his previous marriages, and he was also the first king of Hungary from the Angevin dynasty.  Elizabeth gave birth to five sons, thus making the future of the Hungarian Angevins secure.  Elizabeth’s first two sons died as children, but the next three, Louis (b.1326), Andrew (b.1327) and Stephen (b.1332) survived their father.

On 17 April 1330, an event known as the “Zah Affair” occurred that almost cost Elizabeth and her family their lives.  The king, queen, and their two small sons, Louis and Andrew, were dining at their palace of Visegrad, when a powerful Hungarian knight, Felician Zah, stormed in, attempting to kill the royal family.  Elizabeth suffered the worst injuries in the attack, losing four of her fingers on her right hand.  She apparently was trying to protect her sons, who remained unharmed.  The guards killed Zah immediately.

No one knows Felician Zah’s exact motivations for the attempted assassination.  The most common story behind the Zah Affair involves Elizabeth and her brother Casimir.  The story goes that Casimir was visiting the Hungarian court, and seduced or raped Klara, Zah’s daughter, and lady-in-waiting to Elizabeth.  By the time Zah found out, Casimir had already returned to Poland, but Zah believed Elizabeth helped him with the seduction.  Wanting revenge for his daughter’s stolen honour, Zah tried to kill the whole royal family, Elizabeth being his central target.  After the failed attempt, the king had Zah’s close family members tortured to death, including Klara.  More distant relatives were stripped of all their property.  Casimir became King of Poland in 1333.

As long as Charles of Hungary lived, Elizabeth had to conceal her political ambitions.  Nevertheless, she was an active queen consort, and started one of her favourite activities, founding religious houses, during her husbands lifetime.  Many churches that opened in Hungary during Elizabeth’s lifetime owed their existence to her.  On 16 July 1342, Charles died, and his son, 16-year-old Louis became the new King of Hungary.  Elizabeth’s influence greatly grew, and she would remain as one of the most powerful figures for most of her son’s reign.  For the rest of her life, she was Louis’ most trusted adviser. 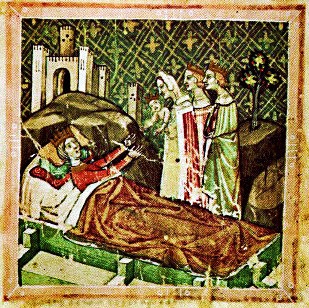 Elizabeth and Charles’ sons were all to make advantageous marriages.  Their second son, Andrew, was married to Queen Joanna of Naples, also a member of the house of Anjou.  There were plans to marry Louis to Joanna’s younger sister, Maria, but soon after her husband’s death, Elizabeth had him married to Margaret of Bohemia.  The youngest son, Stephen married Margaret, daughter of Louis IV, Holy Roman Emperor.  Charles had Andrew married to Joanna on the condition that they would both be joint monarchs of Naples.  However, when Joanna’s grandfather, King Robert of Naples died in 1343, he bequeathed Naples to Joanna only, making no mention of Andrew.  Joanna was crowned as sole monarch of Naples, and this greatly angered Elizabeth and her sons. 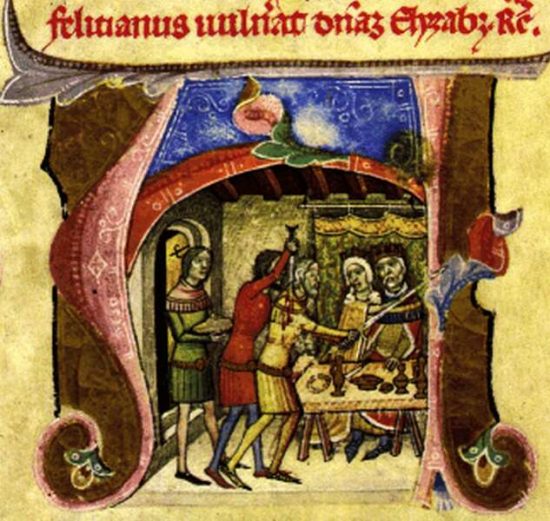 In July 1343, Elizabeth travelled to Naples with a powerful procession of Hungarian noblemen to fight for her son’s rights.  She tried to bribe the Pope into permitting Andrew to be crowned.  She spent months touring Italy advocating for her son’s coronation.  She eventually returned to Hungary, believing that Andrew would be recognised as Joanna’s co-ruler.  She left Andrew with a ring that was believed to protect him from blade or poison.  Her efforts came to nothing, and Andrew was murdered in September 1345.

Although the exact culprit in Andrew’s death remains unknown to this day, Elizabeth and Louis believed Joanna guilty.  They both demanded that Joanna be stripped of her kingdom.  In June 1346, Elizabeth wrote a letter to the Pope that “closely resembled a declaration of war.”  Louis invaded Naples the next year and adopted Joanna’s titles.  He was ultimately unsuccessful in his invasion and returned to Hungary.

The King’s most Trusted Advisor

In 1349, the Black Death raged in Hungary, killing Louis’ young wife, Margaret.  Having no children, Louis needed to marry again.  In June 1353, Louis married Elizabeth of Bosnia.  This marriage was possibly arranged by Elizabeth of Poland herself.  Elizabeth’s new daughter-in-law seems to have completely subjected herself to her mother-in-law and did not have a court of her own.  Based on later events, it seems that the younger Elizabeth was greatly influenced by the formidable Queen Mother.

Elizabeth’s youngest son, Stephen died in 1354 from a horse fall.  Out of her five children, only Louis was still alive.  Louis and Elizabeth were really close.  Louis was always quick to defend his mother, When Holy Roman Emperor Charles IV called her “shameless”, Louis was furious and demanded an apology.  Elizabeth often acted as regent when her son was absent from his kingdom.  She also administered Dalmatia at one point.

Elizabeth’s brother Casimir III of Poland had no sons and considered Elizabeth and Louis as his heirs.  When he died in 1370, he left two small daughters by his fourth marriage, but their legitimacy was in question because his second wife was still living.  Casimir also had two daughters from his first marriage who predeceased him.  One left children, but Casimir chose his nephew, Louis over them.  Despite his mother being Polish, Louis did not speak the language, and barely visited Poland.  When Louis was crowned King of Poland in November 1370, he soon returned to Hungary.  Elizabeth remained in Poland to be regent.

Elizabeth proved to be unpopular in her native country.  The Polish nobility nicknamed her “Queen Stumps”, a mocking reference to her wounds from the long-ago Zah Affair.  She brought many Hungarians with her, which caused discontent with the Polish.  Meanwhile, her son was in a similar situation Casimir was in.  Louis remained childless for a long time, but his wife bore him three daughters in the early 1370s.  Since there were no sons, Elizabeth spent her regency to secure her granddaughters’ succession in Poland.

Elizabeth’s regency was troubled by much robbery and looting in the kingdom.  In August 1375, she returned to Hungary, to be closer to Louis, who was struggling with a disease said to be similar to leprosy.  However, she returned to Poland in October 1376.  She would not stay for long.  That autumn, a Lithuanian prince invaded in Poland, burning villages and taking prisoners.  Elizabeth was accused of ignoring the warnings of this attack.  On 7 December 1376, a brawl broke out in Cracow between the Polish and Hungarians of Elizabeth’s court.  This led to a major massacre where many of Elizabeth’s Hungarian men were killed.  Fearing for her life, Elizabeth escaped to Hungary in disgrace soon afterwards.

Elizabeth retired to a religious life after her regency, but she seems to have never taken formal vows.  For her last four years, she was occasionally active in Hungary-Polish politics.  She returned to Poland for a final time in 1379 to help secure her granddaughters’ rights to the Polish throne.  She seems to have been active almost to the end, returning to Hungary in November 1380.  Elizabeth died on 29 December 1380, aged about seventy-five, an extra-long life by 14th-century standards.  She was buried in the Monastery of St. Clare in Buda, one of the religious houses she founded.  Her only surviving son, Louis died in 1382.

A perfume called “The Queen of Hungary’s Water”, also known as “Hungary Water” is said to have been first ordered for Elizabeth of Poland herself.  Hungary Water is the oldest known alcohol-based perfume in Europe.  According to legend, Elizabeth ordered this perfume to restore her youthfulness.  One legend even says that it made the 60-year-old queen look 30, and some younger princes proposed to her!  Hungary Water can still be purchased today.

Even though Elizabeth of Poland is largely forgotten today, she was one of the most powerful women in the fourteenth century.  Few queens could have been survivors on her level- she survived childbirth, an assassination attempt, opposition, and lived through times marked by plague and war.  She lost all but one of her children.  More light should be shed on her story today.

Bak, Janos M., “Queens as Scapegoats in Medieval Hungary” in Queens and Queenship in Medieval Europe

Goldstone, Nancy: The Lady Queen: The Notorious Reign of Joanna I, Queen of Naples, Jerusalem, and Sicily

Halecki, Oscar: Jadwiga of Anjou and the Rise of East Central Europe

About CaraBeth 34 Articles
I love reading and writing about the royals of medieval Europe- especially the women. My interest was first started by the Plantagenet dynasty, but I decided to dive deeper, and discovered that there were many more fascinating royal dynasties in medieval Europe. Other dynasties I like reading and writing about are; the Capets, and their Angevin branch in Naples and Hungary, the Luxembourgs, the early Hapsburgs, the Arpads, the Piasts, the Premyslids and many more!