Blanche of Castile was born on 4 March 1188 as the daughter of Alfonso VIII of Castile and Eleanor of England. Not much is known of her youth. At the age of 12, Blanche was betrothed to the future Louis VIII of France. She and her sister Urraca were visited by their grandmother Eleanor of Aquitaine, who decided that Blanche’s personality was more fit to be Queen of France. The marriage was celebrated on 23 May 1200. Louis was just one year older than Blanche so the marriage was not immediately consummated. Their first child, a daughter who died not long after birth, was born in 1205. Their next child would not follow until 1209. In total, they would have thirteen children, though only five would live to adulthood. 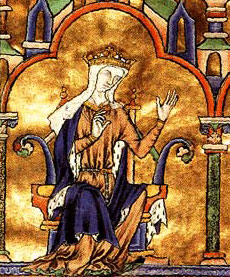 Louis’ father died in 1223, and her husband succeeded as King of France. He and Blanche were crowned on 6 August 1223. It was to be a short reign. Louis died of dysentery on 8 November 1226. Their eldest surviving son, also named Louis, was just twelve years old. She raised him to be a good Christian, saying “I love you, my dear son, as much as a mother can love her child; but I would rather see you dead at my feet than that you should ever commit a mortal sin.” 1

Blanche took charge and had him crowned at Rheims within a month of his father’s death. She even managed to get several reluctant barons to swear allegiance to him. The situation in the south was precarious as Louis VIII had died without subduing the nobles there. Blanche and her son were nearly captured as they travelled south of Paris, though they were saved by the people of Paris who lined the roads to protect them.

She managed to organise an army, which temporarily halted the nobles. She accompanied the army and even collected wood to help keep the soldiers warm. She was responsible for the signing of the Treaty of Paris, in which Raymond VII, Count of Toulouse finally submitted to her son. His daughter and heiress Joan was to marry Blanche’s son Alphonse.

One of her major enemies was Henry III of England, who sought to gain more French lands through marriages and Blanche denied him the first two brides he wanted. In 1230 Henry invaded France and Brittany also rebelled against the crown. This was quickly put down by Blanche and Louis.

Her son married Margaret of Provence in 1234 and Blanche did not have a good relationship with her daughter-in-law. In a controlling move, Blanche dismissed the family and servants who accompanied Margaret before she even reached Paris. This is probably also around the time Louis began his more personal reign, though no official end date for Blanche’s regency is given.

She once again acted as regent in 1248, when her son went on crusade. She did not approve of him going. She fell ill in November 1252 and died after a short illness on 27 November 1252. Louis was not informed until the following spring and reportedly did not speak to anyone for two days. Blanche was buried at Maubuisson Abbey, which she had founded. 2

A surviving letter from Blanche 3

Blanche, by the grace of God queen of France, to her beloved citizens and the whole community of Béziers, greetings and love.
That you bear sincere faith towards our [beloved] son the king and have done so in the past and will do so in the future, as we understand from the tenor of your letters and because our beloved, G. des Ormes, seneschal of Carcassonne much extols you, we thank you for your fidelity, in whose constancy we have hope and faith. We ask and request that you so persevere in the constancy of said fidelity and act so faithfully and virilely and give counsel and help to the people of that king our [beloved] son that you deserve to have our help and favor and his.
Enacted at Chateauneuf, A.D.1240, in the month of October.

About Moniek 1538 Articles
My name is Moniek and I am from the Netherlands. I began this website in 2013 because I wanted to share these women's amazing stories.