The future Queen Wilhelmina was born on 31 August 1880 in The Hague as the daughter of King William III and his second wife Emma of Waldeck and Pyrmont. William had previously been married to Sophie of Württemburg, the two had three sons but were as unmatched as possibly could be. Sophie had died in 1877 and requested to be buried in her wedding dress, as she considered her wedding day the true date of her death. Of their three sons one died in childhood, the eldest drank himself to death, supposedly because he could not marry the woman he loved and the youngest, Alexander, was still alive at the time of Wilhelmina’s birth. He was a bit peculiar and he never married. He died in 1884.

The succession crisis was already clear to William even before the deaths of his two sons and he had decided to marry again. He was 63 while Emma was only 21. Wilhelmina became the heiress presumptive when Alexander died in 1884.

Little Wilhelmina was baptised on 12 October 1880 in The Hague wearing a christening gown that was also worn by the Netherlands’ current King Willem-Alexander. She reportedly took her first steps on her first birthday. Her father died on 23 November 1890 and Wilhelmina became the Netherlands’ first Queen regnant at the age of 10. Her mother Emma, now known as the Queen mother, became her regent until her 18th birthday. The Duchy of Luxembourg, which was in personal union with the Netherlands, went to a distant relative from the house of Nassau.

Emma was a good regent for her daughter and she tried to follow in the footsteps of her husband. Meanwhile, she was also trying to raise a Queen. The task aged her tremendously and her health became frail. On 6 September 1898, Wilhelmina was enthroned in Amsterdam.

She was barely enthroned when attention turned to finding her a husband. In May 1900 Wilhelmina was presented with three candidates and the chosen candidate was Duke Henry of Mecklenburg-Schwerin. The engagement was announced on 16 October 1900. They married just five months later on 7 February 1901. Wilhelmina suffered her first miscarriage later that year on 9 November. She soon became pregnant again, but by April she became seriously ill with typhoid and she suffered another miscarriage in May. She suffered another miscarriage on 23 July 1906. Fears began to arise that the throne would pass into German hands, as a grandson of Princess Sophie (Wilhelmina’s aunt) was first in line. On 30 April 1909, the future Queen Juliana was born to them. 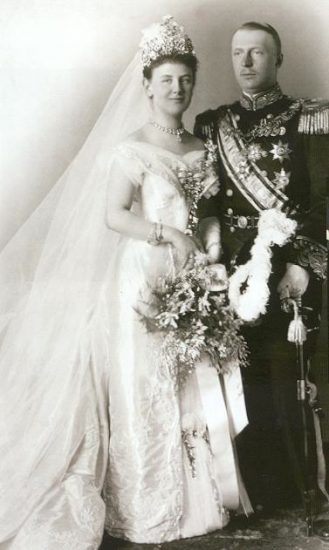 During the First World War, the Netherlands was neutral territory and several incidents were settled due to Wilhelmina’s contacts with the German Emperor.  The German Empire fell apart in 1918 and Wilhelm II requested political asylum in the Netherlands. This was given to him despite protests from the allies. Wilhelmina did not have any contact with him.

The years between the two world wars saw the introduction of the right to vote for women. Trouble had also been rising in her own marriage as Prince Henry (as he was now known) was quite a philanderer. They mostly lived apart. Both Henry and her mother Emma died in 1934. The Royal Family was now down to just two people. They were on the brink of extinction. During this time Wilhelmina considered abdication, but Juliana was still unmarried at that time. Juliana married Prince Bernhard of Lippe-Biesterfeld in 1937 and suddenly the Royal Family was no longer on the brink of extinction. They had four daughters, Beatrix (1938), Irene (1939), Margriet (1943) and Christina (1947).

The invasion of the Netherlands took place on 10 May 1940 and the Royal Family was forced to flee. They first fled to London and Juliana and her children later travelled on to Canada, where Princess Margriet was born. Wilhelmina remained in London with her government in exile and transmitted radio messages to her people via Radio Orange and Hitler called her ‘the archenemy of humanity’. She was nearly killed by a German bomb, which landed close to her house north of London.

The war was officially over in 1945 and Wilhelmina returned to the Netherlands. She lived in a normal house in The Hague while visiting the affected areas of the war. The years after the war also saw the decline of her health. Her daughter Juliana was twice forced to act as regent. On 12 May 1948, Wilhelmina announced she would be abdicating in favour of her daughter, which she officially did on 4 September. She retired to the Loo Palace. She appeared in public a lot less but was always present for major events like the North Sea Flood of 1953 and the 18th birthday of Princess Beatrix in 1956. She wrote her autobiography, Lonely but not Alone.

She died in her sleep on 28 November 1962 at the Loo Palace probably due to a heart condition and it was announced that her health had been much more seriously compromised than had been announced to the public before her death. She lay in state at the Lange Voorhout Palace before being interred in the New Church in Delft. People wore white at her funeral, as she had wished.

Queen Wilhelmina, Mother of the Netherlands by Philip Paneth (UK & US)