This biography of Queen Maria de Molina thematically explores her life and demonstrates her collective exercise of power and authority as queen. Throughout her public life, Maria de Molina’s resilient determination, as queen and later as regent, enabled her to not only work tirelessly to establish an effective governing partnership with her husband King Sancho IV, which never occurred, but also to establish the legitimacy of her children and their heirs and their right to rule. Such legitimacy enabled Queen Maria de Molina’s son and grandson, under her tutelage, to fend off other monarchs and belligerent nobles. The author demonstrates the queen’s ability to govern the Kingdom of Castile-Leon as a partner with her husband King Sancho IV, a partnership that can be described as an official union. A major theme of this study is Maria de Molina’s role as dowager queen and regent as she continued to exercise her queenly power and authority to protect the throne of her son Fernando IV and, later, of her grandson Alfonso XI, and to provide peace and stability for the Kingdom of Castile-Leon. – From Amazon 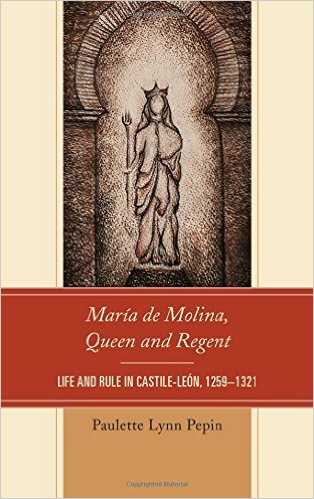 The name Maria de Molina will perhaps not ring a bell with a lot of people. She was born as María Alfonso Téllez de Menezes circa 1265 as the daughter of Infante Alfonso of Molina and Mayor Alfonso de Menezes. In 1282 she married her second cousin, Infante Sancho, who was the second son of Alfonso X of Castile and León. They did so without papal dispensation. They had seven children over a period of ten years, though not all would live to adulthood. Alfonso’s elder brother Ferdinand had died in 1275, leaving behind a widow and two sons. Upon the death of Alfonso X, Sancho got the majority of the noblemen to declare for him, instead of Ferdinand’s eldest son and he was crowned in Toledo. Maria was now Queen of Castile and León. Sancho’s reign was to be short. He died of tuberculosis at the age of 36, just 11 years after usurping the throne. Before his death he granted the regency of his eldest son, Ferdinand, to his wife Maria and Sancho’s uncle, Henry of Castile.

Maria was to be victorious in the end. She was finally granted a papal dispensation, legitimizing her marriage and children. She was regent for her son and later also her grandson. Her two daughters became Queen of Aragon and Portugal. It seems strange that so little has been written about a woman who has accomplished so much.

Paulette Lynn Pepin, Ph.D. is an Associate Professor of History at the University of New Haven and she is the author of  “María de Molina, Queen and Regent: Life and Rule in Castile-León, 1259-1321”. As I expected, it is really well researched and provides an excellent look at this forgotten Queen’s life. There are quite a few notes after every chapter in the book. It saddens me that the price of this book will mean that it is not available to all those who might wish to read about this formidable woman, who secured the throne for her son. Right now, the US price is $80.00 and the UK price is £56.65. It seems like an over the top price, unfortunately this seems to be the norm for academic books. It’s a shame.