Silla was one of the Three Kingdoms of Korea, and it lasted for 992 years. During its long years, three Queens regnant ruled the lands. Today it is part of both North and South Korea. 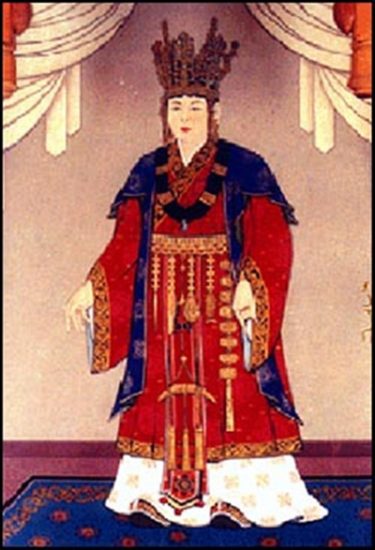 Seondeok was the daughter of King Jinpyeong of Silla and Queen Maya. She was born at an unknown date. Before her accession, she was known as Princess Deokman. She was selected as her father’s heir as she had no brothers. Though it had never been done before in Silla, women were already affluent as advisors and regents. The status of women was relatively high compared to other countries at the time.

Her father died in 632 and Seondeok began her personal reign in the midst of a rebellion and the relationship with neighbouring countries Baekje and Goguryeo was precarious. Silla was invaded by Baekje, and she allied herself with Goguryeo. When Goguryeo also turned against her, she allied herself with China. She presided over the completion of Buddhist temples, and she was also responsible for the building of an observatory, which still stands today.

She died on 17 February 647 and was succeeded by her cousin, Jindeok.

Jindeok was born at an unknown date as the daughter of Kim Gukban (King Jinpyeong’s younger brother) and Lady Wolmyeong. She became Queen upon the death of her cousin Seondeok. She reigned for seven years, during which time she was able to improve relations with China, which laid the foundation for the unification of the three Kingdoms of Silla, Baekje and Goguryeo.

Jinseong was born circa 865 as the daughter of King Gyeongmun and Queen Munui. She had two brothers who both became King, but both also died without issue. She succeeded Jeonggang in 887. She could not live up to her predecessor’s reputation, and during her reign, public order collapsed. In 895 she appointed Kim Yo, an illegitimate son of her brother, as Crown Prince and abdicated in his favour. She died on 31 December 897.