Her Majesty has given birth to a small yet perfectly healthy Archduchess. – Count Khevenhüller

On the morning of 2 November 1755 Maria Theresa gave birth to her 15th child, a daughter named Maria Antonia Josepha Johanna, they would call her Antoine. Like her siblings before her, her early youth was spent with a wetnurse. Maria Antonia’s wetnurse was named Constanze Weber. Her birthdate was rather auspicious as it fell on All Souls’ Day and so it was usually celebrated a day early. When she was just six months old, the Treaty of Versailles was signed, which would have an enormous effect on the rest of Maria Antonia’s life. She was already a piece on her mother’s chessboard.

Maria Antonia was particularly close to Maria Carolina, who was only three years older than she was and the two remained close friends for the rest of their lives. The year 1767 was Maria Theresa’s annus horribilis. Smallpox struck the family hard, and even Maria Theresa herself became ill. Maria Antonia had had a mild form of smallpox at the age of 2 and was immune but her sister Maria Josepha, destined to marry the King of Naples, died and another sister Maria Elisabeth was scarred for life and promptly taken off the marriage market. Maria Carolina was to take Maria Josepha’s place as a bride for the King of Naples, and while she had once been considered for a French match, that was now definitely not happening. During her journey to Naples, Maria Carolina wrote to their governess, “Write to me everything you know about my sister Antoine, to the tiniest detail, what she says and does and even what she thinks… Beg her to love me because I care so much for her.”

For the first time, Maria Antonia was the centre of her mother’s attention. Maria Antonia was to take Maria Carolina’s place for the French match. Maria Antonia’s teeth were crooked, and she was to suffer a three-month painful treatment with a system called “the Pelican” to set her teeth straight. Her one shoulder was higher than the other, and so she had to use a shoulder filling or a corset. At the time she was rather skinny and had no bosom to speak of, but as she had not even entered puberty, it was hoped she would fill in a bit. Even the first day of her menstruation is recorded; 7 February 1770. The bride was ready, and the intended groom was 15-year-old Louis-Auguste, Dauphin of France. He had become heir to his grandfather after the deaths of his father and two elder brothers. He had had an unhappy start in life and lacked in self-confidence, despite an obvious intelligence.

On 19 April 1770, a marriage by proxy took place and just two days later, the new Madame la Dauphine was ready to depart for her new life in France. Her mother told her, “Goodbye my dear child. A great distance will separate us now. Do so much good to the French people that they will say that I have sent them an angel.” A procession of 57 carriages left the capital as Maria Antonia cried. It would take two and half weeks to travel from Vienna to Versailles. In an abbey in Schuttern Maria Antonia spent her last night on German soil. There she met some of the French courtiers, such as the Count and Countess de Noailles, who Maria Antonia would later nickname “Madame Etiquette”, due to her rigid adherence to court etiquette. On an island near Kehl in a hastily constructed wooden building, Maria Antonia became Marie Antoinette, Dauphine of France. Here she said goodbye to her Austrian entourage as only Prince Starhemberg would travel with her. Even her dog Mops was not allowed into France. She was completely undressed and redressed in French clothes. She first met her future husband on 14 May around 3 o’clock in the afternoon in the woods near Compiegne. Louis-Auguste recorded their first meeting with the brief words, “Meeting with Madame la Dauphine.” That night Marie Antoinette was introduced to the Princes and Princesses of the blood, including the Princess de Lamballe, who would become a close friend.

On 16 May, she arrived at Versailles with her entourage and moved into the ground floor apartments that used to belong to Louis-Auguste’s mother. This would only be temporary. In these apartments, she began to prepare for yet another wedding ceremony. The most important part of the day was perhaps the bedding ceremony. The Archbishop of Reims blessed the marital bed, the King was present and personally handed his grandson his nightgown, and Marie Antoinette was handed hers by the Duchess of Chartres.  When both were put to bed, the entourage bowed or curtseyed and withdrew. Nothing happened.

Life at Versailles happened entirely in public and was led by ceremonies. The rules were elaborate and complicated and caused quite some competition among the nobles. Marie Antoinette often wrote to her, and one of her first letters home reports on her life in public. “I put on my rouge and wash my hands in front of the world!”

Maria Theresa blamed her daughter for the lack of activity in the royal bedroom. “Everything depends on the woman if she is willing, sweet and amusante.” A court physician was called in for a physical, but nothing was found to be wrong. 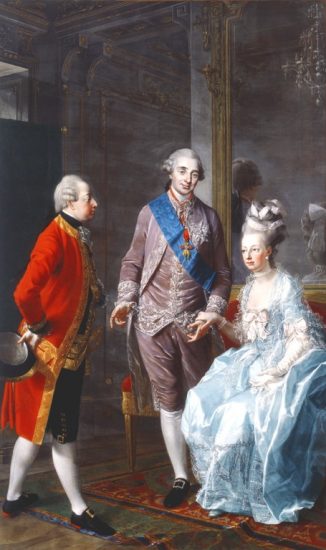 On 10 May 1774 at 3 o’clock in the afternoon, King Louis XV died of smallpox, and Marie Antoinette and Louis-Auguste waited anxiously in her apartments for news. Nobles literally came running to the King and Queen. “Dear Lord, guide and protect us. We are too young to rule”, the new King spoke. The fear of the smallpox was great, and so Versailles was abandoned for the Palace of Choisy and further on to La Muette, Marly and Fontainebleau. They would not return to Versailles for another six months. The lack of consummation of the marriage began to cause Marie Antoinette great humiliation. Her sister-in-law became pregnant and gave birth to a son in 1775. Courtiers began to insult her, “When will you give us an heir?” Marie Antoinette remained calm until she reached her own apartments. Satirical pamphlets made the situation even more insulting.

On 18 April 1777, Marie Antoinette’s brother Emperor Joseph II arrived to save the royal marriage. He lectured her on the company she kept and her gambling which she had taken up, but he was also kind to her. She was still his little sister. Joseph even spoke to Louis-Auguste who simply recorded, “Walked with the Emperor” in his journal. Shortly before Marie Antoinette’s 22nd birthday “the great work” was at last done. In the spring of the next year, she began to suspect that she might be pregnant and a doctor confirmed her pregnancy. She went into labour in the early morning of 19 December, and a little girl was born just before noon. She was named Marie Thérèse Charlotte. Marie Antoinette said, upon being told of the gender, “Poor little girl, you were not what was desired, but you are no less dear to me. A son would’ve been the property of the state. You will be mine, you will have my undivided attention, you will share in my happiness, and you will ease my suffering.”

Marie Antoinette feared that she had had a miscarriage in the summer of 1779 and her mother never lived to see the birth of a son and heir. Maria Theresa died on 29 November 1780, and Marie Antoinette was devastated. She was definitely pregnant early in the next year. A Dauphin was born on 22 October 1781. Louis-Auguste told her, “Madame, you have fulfilled our desires and those of France, you are the mother of a Dauphin.” A second son was born on 27 March 1785, followed by a second daughter on 9 July 1786 but the little girl died before her first birthday.

The young Dauphin too would not survive infancy. He was in ill health for most of his short life, and he died on 4 June 1789.

Marie Antoinette’s reputation began in rather a good standing but as her spending increased and her reputation was tarnished in the Affair of the Diamond Necklace. Louis-Auguste had begun to ask for advice, which not all took well. The political situation began to spiral out of control. Riots in Paris led to the storming of the Bastille on 14 July 1789. On 5 October, the family was forced to move from Versailles to the Tuileries Palace, where they essentially lived under house arrest. A plan to escape was set in motion.

On 21 June 1791, an escape was attempted, but the family was arrested less than a day later and taken back to Paris. If the King had any support left, it was now gone. They were held under surveillance at the Tuileries Palace, and her health began to quickly deteriorate. Reportedly, her hair turned white in a single night. Marie Antoinette hoped that her Austrian relatives would come to the rescue, but none ever came. On 13 August 1792, the family was imprisoned in the Temple. On 3 September, the Princess de Lambelle was convicted and thrown to a group of men, who murdered her. She was decapitated, and her head was paraded in front of the Temple. On 21 September 1792, the monarchy was officially abolished, and the French Republic was declared. 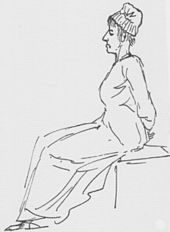 Louis-Auguste was separated from the family and tried in December. He was condemned to die on 15 January 1793 and was guillotined on 21 January 1793. Her son was now nominally King Louis XVII. Marie Antoinette remained imprisoned with her two children and Louis-Auguste’s sister Élisabeth. On 3 July 1793, her son was taken from her, and on 1 August Marie Antoinette herself was transferred from the Temple to the Conciergerie, while her sister-in-law and daughter remained in the Temple. Her trial began on 14 October 1793. She was even accused of incest with her son. On 16 October, she was declared guilty of depleting the national treasury, conspiring against the internal and external security of the state and high treason. She was condemned to death.

She wrote a letter to her sister-in-law in her last hours, but the letter never reached Élisabeth. She changed into a plain white dress, and her hands were bound behind her back. She was forced to sit in an open cart for the drive to the Place de la Révolution.

At 12:15 in the afternoon on 16 October 1793, Marie Antoinette was guillotined. Her last words were to the execution, on whose foot she had accidentally stepped. “Pardon me, sir, I meant not to do it.” Her body was thrown in an unmarked grave in the Madeleine cemetery. She and Louis-Auguste were later exhumed and reburied in the Basilica of St Denis. Her sister-in-law suffered the same fate 10 May 1794, and the only surviving member of the direct royal family was her eldest daughter Marie Thérèse. 1