Maria Christina of Austria was born on 21 July 1858 as the daughter of Archduke Karl Ferdinand of Austria and his wife, Archduchess Elisabeth Franziska of Austria. She was Princess-Abbess of the Theresian Royal and Imperial Ladies Chapter of the Castle of Prague from 1875 until 1879. 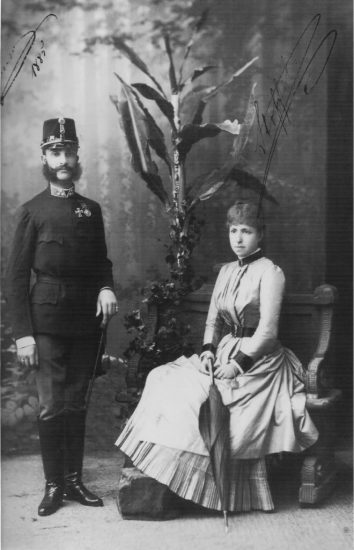 On 29 November 1879, she married King Alfonso XII of Spain at the Basilica of Atocha in Madrid. She was his second wife. His first wife, Mercedes of Orléans, had died in 1878 from typhoid fever. They had two daughters, Mercedes, Princess of Asturias and Infanta Maria Teresa of Spain before Alfonso died of dysentery on 25 November 1885, leaving behind a pregnant Maria Christina. A strange situation now occurred, if the child Maria Christina was carrying was a boy, he would be King from birth. If it was another girl, her eldest daughter Mercedes would become Queen.

During this time Maria Christina ruled as regent for the vacant throne, awaiting the outcome of the birth. Her regency was met with some scepticism, not only was she a foreigner but her husband’s mother, the deposed Isabella II of Spain, considered it to be almost a usurpation of the throne. Some were even in favour of restoring Isabella to the throne. There were also the Carlists, hoping that the regency would bring about chaos and they would be its saviours. The Carlists had opposed the accession of Isabella II and had instead promoted that of her uncle Infante Carlos, Count of Molina. His descendants continued the Carlist claim.

Maria Christina won the support of the Catalans for her policy of reconciliation. To please the Basques, she studied their difficult Euskara language and learned to admire its hard-working people. Her mercy shown to Villacampa after the last serious upheaval there kickstarted her popularity. Little by little the Spanish people began to respect her. She had won their hearts.

Her son, immediately King Alfonso XIII of Spain, was born on 17 May 1886. Maria Christina would continue to act as regent for him until he attained his majority in 1902.

Her chief adviser was Práxedes Mateo Sagasta. Her regency was described as well balanced, and she managed to prevent political conflicts. However, she was not well acquainted with corruption in Spanish politics. She found herself impeded at almost every step. She did manage to keep the country from going to pieces, but it did lose its colonies, the army was badly trained, and the treasury was depleted. She is credited with preserving the Kingdom for her son.

She was no longer the first lady at court when her son married Victoria Eugenie of Battenberg in 1906, but he still came to her for advice. Maria Christina fell ill with heart disease in 1929 and died on 6 February 1929. She is buried in El Escorial.

She will always occupy a high place in the history of Spain. She left a reputation of Queenly dignity.1