Maria Carolina of Austria was born on 13 August 1752 as the daughter of Empress Maria Theresa of Austria and Francis of Lorraine. She was the third daughter to carry this name, as two elder sisters with the same name died in infancy. Her full name was Maria Carolina Louise Josepha Joanna Antonia. Maria was for the Virgin Mary, Carolina was for her maternal grandfather Charles VI, Louise was for King Louis XV, who was also a godfather, Josepha was for her older brother, Joanna was for St. John the Apostle and Antonia was for St. Anthony of Padua. Despite her many names, she was known as Charlotte.

Her early years were spent at her parents’ palaces, the Hofburg, Schönbrunn and Laxenburg. Especially at Laxenburg, the atmosphere was free of rank and title, and it had relaxed rules of protocol. Maria Carolina was close in age to her sister Maria Antonia, who was born in 1755 and the two were practically raised as twins. Maria Carolina was considered not to be as beautiful as Maria Antonia, and she was described as “large, rawboned and bulky…with a pinched face and a severe expression.” Combined with her headstrong personality, Maria Carolina was quite a source of frustration for her mother. The close friendship with Maria Antonia would continue even after both were married and Maria Theresa would often threaten to separate the two if they did not behave.

Maria Carolina was just 13 years old when her father died in 1765. Maria Theresa wrote, “I am letting myself be dragged back to Vienna, wholly and solely to assume guardianship of nine orphans. They are greatly to be pitied.  Their good father idolised them and could never refuse them anything. It will be changed times now. I am exceedingly anxious about their future, which will be decided in the course of the next winter.”

As smallpox raged through the family in October, Maria Theresa’s five unmarried daughters had their fates sealed. Maria Elisabeth was horribly disfigured by the disease and was now unfit for marriage. The 16-year-old Maria Josepha was to be the next Queen of Naples, but just a few days before her departure she was taken to the Imperial Crypt by her mother, where they prayed at the unsealed tomb of Empress Maria Josepha (born of Bavaria) who had died of smallpox. Maria Josepha died of smallpox two weeks later, and a new bride was needed for Naples. Maria Carolina was to be the one.

Maria Carolina dreaded marriage to King Ferdinand IV of Naples and she fought tooth and nail with her mother to avoid marriage. It was no use. Their proxy marriage took place on 7 April 1768 in the Church of the Augustines in Vienna. Her younger brother Ferdinand stood in for the groom. She left for Naples that very afternoon. As the carriage pulled away, Maria Carolina jumped out at the last second and ran to Maria Antonia in “a series of passionate, tearful embraces.” Her mother tried to reassure her young daughter by writing, “Although an ugly prince, he is not absolutely repulsive…at least he does not stink.” Upon meeting her new husband, she dropped to one knee and kissed his hand and was raised to her feet by Ferdinand. Maria Carolina was relieved to find him not as bad as expected, but she also admitted, “I must tell you and confess that I don’t love him except from duty.”

She later described her wedding night as being so horrible that she considered suicide. “One suffers real martyrdom, which is all the greater because one must pretend outwardly to be happy. I would rather die than endure again what I had to suffer. If religion had not said to me: “Think about God,” I would have killed myself rather than live as I did live for eight days. It was like hell, and I often wished to die.” Maria Carolina quickly learned to dominate her husband. In later years, he would often say, “Ask my wife, she knows everything!” 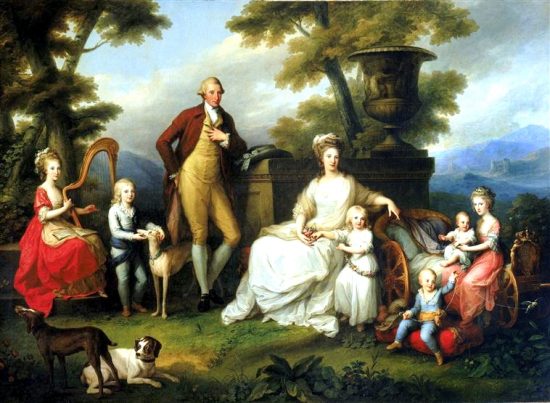 It would be a few years before Maria Carolina, at last, fell pregnant. She gave birth to her first child, a daughter named for the Empress on 6 June 1772. The disappointment in the child’s gender was great. “After waiting some years for the much-desired heir; Maria Carolina gave birth to a lovely infant; but alas! The perverse little creature was of the wrong sex.” If they were worried about having children, they need not have worried. By autumn, Maria Carolina was pregnant again, and over the course of her marriage they would go on to have 18 children, but only seven would live to adulthood, not in the least because of the much-dreaded disease. The much-longed-for heir was born on 6 January 1775, but he died of smallpox on 12 December 1778.

There was nothing more terrible than the combination of accidents which contributed to make the scene of the death of the Hereditary Prince of Naples more horrible. The Queen did not suspect his danger till the moment the physicians declared there were no hopes, at which news one of the women, calling to the King, dropped down in convulsions; her companion fell into the same state, and they could not be removed out of the Queen’s hearing.

Maria Carolina blamed her son’s death on the incompetence of the doctors. It would not be the last time she was to lose a child.

In between giving birth and being a mother, Maria Carolina took down the despotic prime minister, Bernardo Tanucci and it decreased the Spanish influence in Naples. However, the growing Austrian influences did not make her popular at all.

The year 1783 was a catastrophic one for Naples. A massive earthquake struck, and the heavily populated areas of Calabria and Sicily were devastated. Maria Carolina emptied the royal bank accounts to help those affected by the disaster. Maria Carolina began to build up a strong navy for Naples, as she no longer wished to rely on the support of Spain. For this, she enlisted the help of Sir John Acton, a British nobleman and an officer in the Tuscan navy. She became to depend so greatly on Sir John that soon rumours began to fly that the two were lovers. This has never been proven, but Ferdinand believed them. During one particular fight, he screamed Maria Carolina, “I am trying to surprise you together. I will kill you both, and have your bodies thrown out of the windows of the palace!”

By 1791, her health was getting worse, and she began to wish for the end of her child-bearing days. She would have two more children, and at the same time, she became a grandmother. Her eldest daughter Maria Theresa gave birth Archduchess Maria Louise on 12 December 1791; she would be the future Empress of the French as the wife of Napoleon.

Maria Carolina was devasted by her sister’s fate in France. The French Revolution had taken the lives of Maria Antonia, her husband and even her sister-in-law. The only surviving member of the immediate family, Marie-Therese would later write to her aunt, “My mother often spoke of you….She loved you more than all her other sisters.” As the French Revolution began to destabilise Europe, Naples too became feverish. Soon Napoleon came knocking on Naples’ door. The Treaty of Brescia was signed in October 1796, and Maria Carolina was outraged. “I am not and never shall be on good terms with the French… I shall always regard them as the murderers of my sister and the royal family.” Two of Louis XVI’s aunts had been living in Rome, but they were soon forced to flee to Naples. Maria Carolina was annoyed by their presence.

I have the awful torment of harbouring the two old Princesses of France with eighty persons in their retinu and every conceivable impertinence…The same ceremonies are observed in the interior of their apartments here as were formerly at Versailles.

On 29 November 1798, the Neapolitan army was destroyed trying to liberate Rome. Ferdinand fled the city as he feared being captured. The attempted liberation of Rome was in violation of the Treaty of Brescia and Napoleon ordered the invasion of Naples. The royal family was advised to evacuate immediately, but the people surrounded the palace.

They want to keep us as hostages, and force us to make terms with the villains (the French).

They finally managed to escape through a secret passage underneath the palace. They made their way to the harbour and sailed to Palermo. If this all wasn’t tragic enough, Maria Carolina’s young son Alberto fell ill with seasickness and dehydration. He suffered “heart-rendering convulsions” for a day, and died on Christmas day 1798. Naples fell to the French before the end of December. The family was deeply unhappy in Sicily.

In June 1799, they were restored to the throne under the condition that those who collaborated with the French were given an amnesty but Maria Carolina and Ferdinand launched a devastating attack on the Republicans. Of “8,000 political prisoners 105 were condemned to death, only six of whom were reprieved, 222 were condemned life imprisonment, 322 to shorter terms, 288 to deportation and 67 to exile.”

Despite the restoration, Maria Carolina became even more depressed, and she planned to visit Vienna one last time. However, Europe was plunged into war yet again, and she was accused of political meddling. She was urged to flee from Vienna, but she defiantly declared, “I am the daughter of Maria Theresa and will rouse other jealousies in those who, to my misfortune, have no heart.” She finally returned to Naples in August 1802. She no longer dominated her husband, and her political influence was completely diminished. Tragedy struck in September when her daughter Maria Luisa died after giving birth to her sixth child, who also died. She was buried in the Imperial Crypt in Vienna with her baby wrapped in her arms.

In 1803, a second invasion by the French loomed, and Maria Carolina appealed to Napoleon himself, to no avail. It wasn’t until 1806 that it actually happened. The coming invasion had given Maria Carolina some of her zest for life back. While her husband fled, Maria Carolina stayed to organise the resistance movement.

I am prepared for anything, but shall endeavour to die without remorse.

On 11 February she left Naples for the very last time, and it fell to the French three days later. Although Ferdinand was still King of Sicily, he was little more than a puppet of the British. Maria Carolina found nothing enjoyable in Sicily. Her youngest daughter’s wedding was the last time she saw her husband in an official capacity. He blamed her for their misfortunes.

The King is very angry with her; his love is long gone by.

In 1813, King Ferdinand was convinced to sent his wife from Sicily. Maria Carolina wrote to him saying that she pitied him and forgave him. She was to go to Vienna with only her son, Leopoldo. She settled into a quiet life at Hetzendorf Castle. She died suddenly on 8 September 1814 of a stroke.

Thus Maria Carolina passed from the world at the moment of the restoriation of that old order of things, for whose preservation and recovery she had made so many efforts and endured such serious reverses. From the outbreak of the French revolution till overwhelming calamaties weaked her mind and ruined her fortunes, she had fought resolutely for the legitimate sovereigns and thrones of Europe. 1