Princess Sophia of the United Kingdom was born on 3 November 1777 at the Queen’s House as the fifth daughter of George III and Charlotte of Mecklenburg-Strelitz. Later that month, Charlotte wrote to her brother, “I was taken ill and delivered in the space of fifteen minutes.” 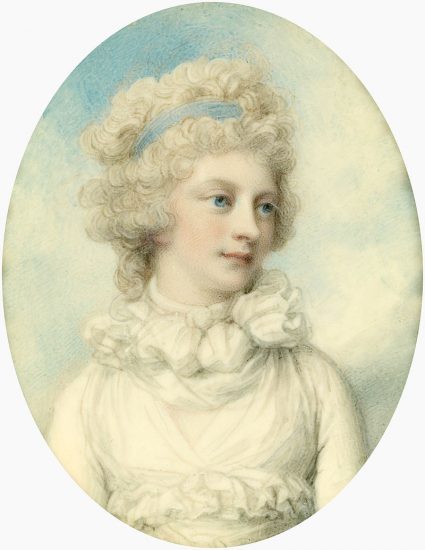 Under the guidance of governess Charlotte Salomé de Montmollin, Sophia learned “a thousand ingenious uses of the needle” and Jane Gomm, an English teacher, supervised the rest of her education. She made her debut at court in 1792, but she fell ill in the early summer of 1793 and remained alarmingly ill for many months. “She takes from 50 to 80 (fits) in the 24 hours, falls back in her chair, more or less convulsed, recovers soon, does not complain of pain, and goes on with her work, or book as if nothing had happened until she sinks again. Sir Lucas Pepys attends her.” She was first sent to Kew to recuperate and then on to Tunbridge Wells.

She recovered, and life stayed pretty much the same. Sophia spent her youth with her five sisters, although the eldest, Charlotte, Princess Royal married Frederick, the future King of Würrtemberg in 1797 and she gained a niece, Princess Charlotte of Wales – the daughter of her brother the future King George IV and Caroline of Brunswick – in 1796. Sophia was the only one of the Princesses to feel sympathy for her sister-in-law, Caroline of Brunswick.

By 1798, Sophia had found herself romantically involved with a most unsuitable match, Colonel Thomas Garth, an equerry of the King. She was ill off and on in late 1799 and 1800 and may not have realised that she was pregnant until very late in her pregnancy. She almost certainly gave birth to a baby boy at Weymouth who was baptised on 11 August 1800 as Thomas Ward. Sophia later stated her “old nurse” was with her “at that dreadful time.” The boy was later adopted by Thomas Garth and he gave him his name.

If this wasn’t enough of a rumour to go around, it was later claimed that Sophia’s own brother, the Duke of Cumberland, was the father of his sister’s illegitimate child. The rumours continued to haunt Sophia for years. Nevertheless, her relationship with her father was very close, and she was overwhelmed as he became sicker and sicker. The family troubles broke Sophia, and she wrote, “when my duty to the best of fathers is at an end, I can retire from this worldly scene and end my days in quiet.” 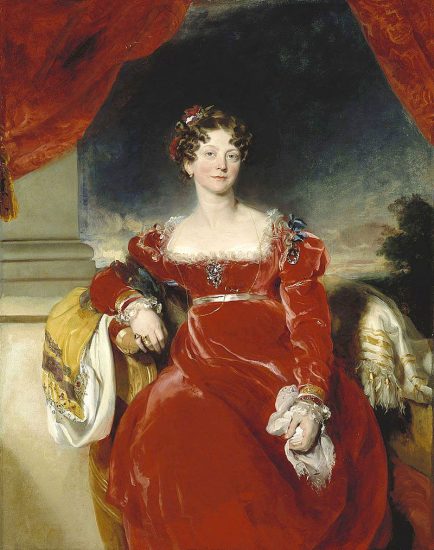 Sophia was again unwell in the summer of 1805 and had to be regularly dosed with laudanum, but it did not stop her from criticising her mother. “She makes my blood boil in some things”, she wrote.

At the end of 1810, Sophia lost her sister Amelia “by illnesses which have never been able to be got the better of”, or rather tuberculosis and Sophia herself fell ill with a “bilious fever” a few weeks later. As the King’s mind deteriorated on one side of Windsor Castle, Sophia was feared to have suffered to same fate on the other side of Windsor Castle. Her letters began to show extreme anxiety. Her life would never be free from ill-health.

Upon the death of her niece Charlotte in childbirth in 1817, Sophia was overcome with grief, but 1818 brought the news of a new marriage, that of 48-year-old Princess Elizabeth and Frederick, Landgrave of Hesse-Homburg. Although no heir was to be expected, she was the only English Princess to be available as Sophia was described as “an invalid.” Not much later Queen Charlotte died at Kew Palace, while Sophia was still at Windsor Castle. In July 1819, Sophia was invited to Frogmore as her health had improved somewhat.

On 29 January 1820, King George III died, and Sophia’s brother was now King George IV. Sophia moved out of Windsor Castle the day after her father’s funeral. She eventually settled at Kensington Palace and was happy there. The mentions of spasms stopped, and Sophia happily spent time with the Duchess of Kent, Princess Feodora (the Duchess’s daughter by her first marriage) and Princess Victoria. Like the Duchess of Kent, Sophia soon became attached to John Conroy.

Not long after Victoria’s accession, Sophia became blind and somewhat deaf. Her letters were being read to her, but she continued to write (indecipherable) letters back. By 1846, Queen Victoria found her aunt to be “a sad sufferer and a completely cripple, unable to move, and quite blind.” However, “she is quite cheerful.”

She died on 27 May 1848 at Kensington Palace. Charles Greville recorded, “she was blind, helpless and suffered martyrdom; a very clever, well-informed woman, but (one) who never lived in the world.” She had left no will but had left clear instructions where she wanted to be buried. No cathedrals, abbeys, or chapels for Sophia. She wished to be buried “on the south side of the cemetery of Kensal Green.” It was near where her brother Augustus, Duke of Sussex was buried. Her funeral was to be “as private as possible.” She was laid to rest on 6 June 1848 in the cemetery vault, for the time being. A casket tomb was designed for her and was ready a year later. She was transferred to “grave plot number 8028”.

Her last remaining sister was shocked at the choice of Kensal Green and remarked, “They shall not carry me there.” Some thought she chose Kensal Green as her supposed son might one day lie there as well, but no such instructions survive.

Her grave at Kensal Green survives to this day and still stands out. 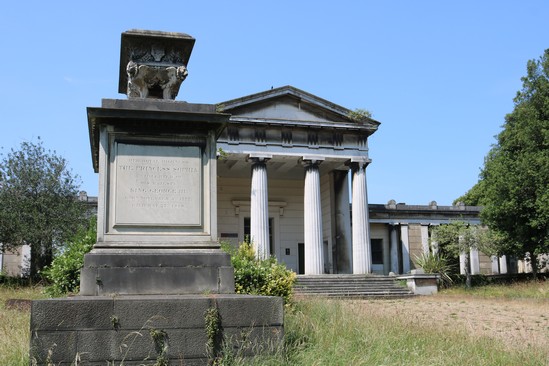 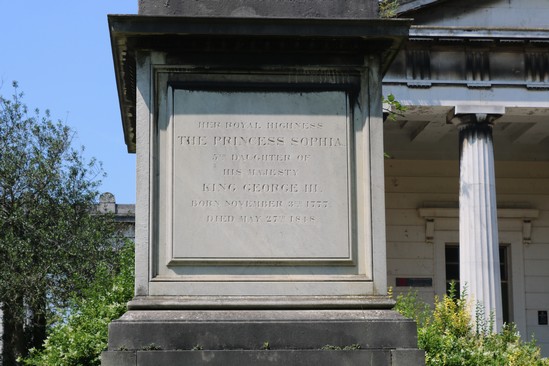 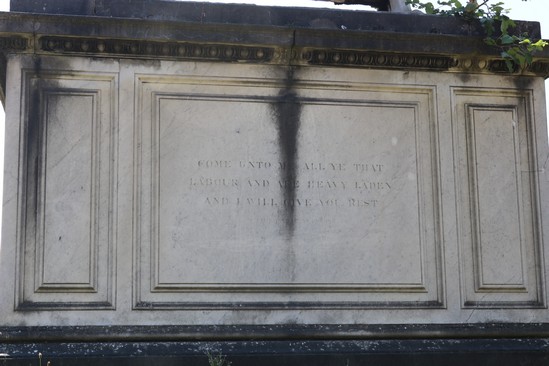 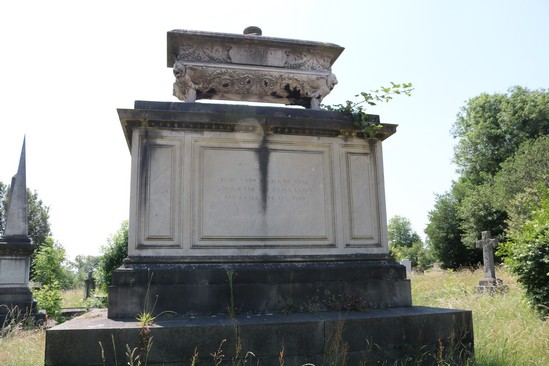 The side of the panel reads, “Come unto me all ye that labour and are heavy laden and I will give you rest.” 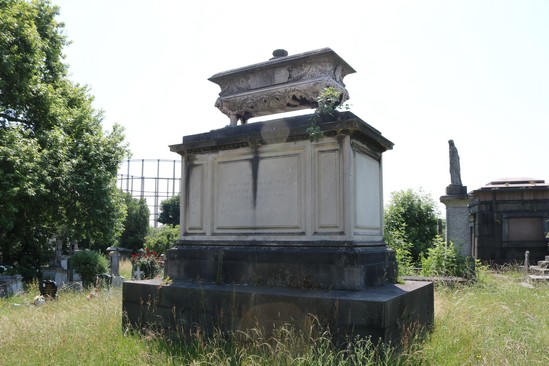 If you wish to visit Sophia’s grave, simply enter Kensal Green Cemetery through the main entrance and walk towards the large Anglican Chapel. Sophia’s grave is on the other side of the building, to the right as you descend the steps. Her brother Augustus, her nephew George, Duke of Cambridge (and his wife Sarah Fairbrother) are also buried near her. 1