Rodrigo Borgia or Pope Alexander VI was Pope from 1492 until his death in 1503. Despite serving the church as a Cardinal and later Archbishop for over forty years before becoming Pope, Rodrigo is not often remembered for his piety.  Pope Alexander VI is instead known as the Papa Cattivo or naughty Pope, a nickname given because of his alleged involvement in poisonings, extortion, bribery, sexual promiscuity and even incest. There is no proof that His Holiness was involved in such a life of crime and many of the rumours were a result of defamation of the Borgia name after Alexander’s death; however the Catholic Church was rife with scandal during this period, so it is likely that there is some truth behind the gossip. 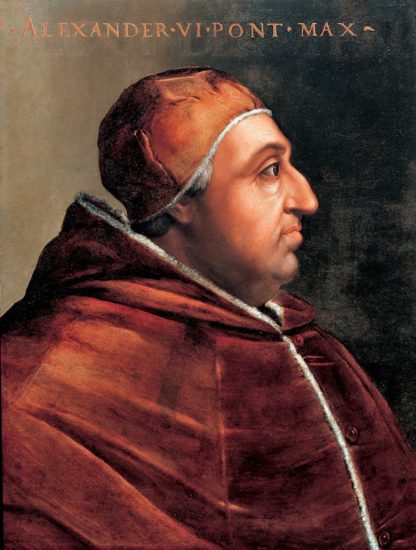 One accusation that we can be sure of is that Rodrigo was involved in sexual relationships with many women, after being ordained by the Catholic Church, which was strictly forbidden. The names of most of these women are unknown, and most of them were likely to have been mere dalliances. There were two mistresses who have made the history books, however, the longest-lasting and most influential being Vannozza dei Cattanei.

Vannozza was born with the name Giovanna in 1442 into an aristocratic family. Famed for her beauty, Vannozza was also smart and industrious and ran a number of inns in Rome. Prior to starting a relationship with Rodrigo Borgia, it is believed that Vannozza was mistress to Cardinal Giuliano della Rovere who later became Pope Julius II.

In around 1470 Vannozza met Rodrigo who had taken Holy Orders including a vow of celibacy just two years earlier. The relationship lasted for over a decade, and the couple had four surviving children together. While other Cardinals and Popes have fathered children throughout history, Rodrigo stands out because he publically acknowledged his offspring. Rodrigo supported Vannozza financially, during and after their relationship and she became the owner of a vast amount of property all over Rome.

Throughout Vannozza’s relationship with Rodrigo, she was married to a string of men who were chosen by him and were complicit in their affair. Vannozza and Rodrigo’s relationship had come to an end before he was elected as Pope, but he continued to support her, and the pair remained close as friends.

The Pope’s children by Vannozza were well looked after by their father. Giovanni, better known as Juan, was made 2nd Duke of Gandia among other titles. Being the son of a Pope did not assure Juan’s safety, however, and he was murdered in 1497. Pope Alexander’s son Cesare was made a cardinal, but later became the first person to ever resign from this post. He was named Duke of Valentinois by King Louis XII of France and aided the French King in war. Cesare became the leader of the Papal armies and took over vast amounts of land which were added to the Pontiff’s dominions. The Prince by Niccolò Machiavelli was heavily influenced by Cesare’s grasp for power.

Their daughter Lucrezia had a total of three marriages, which were arranged by the Pope in order to elevate the status of the family and bring wealth and land. While this was probably an unpleasant experience for Lucrezia herself, it did mean that her branch of the family maintained their honour after the fall of the Borgia as she had married into the powerful house of Este. Lucrezia’s name has been blackened over time, and she is often accused of incestuous relationships with her father and her brother Cesare, which has never been proven.

The youngest child of Vannozza and Rodrigo was Gioffre; he gained the Principality of Squillace and the Duchy of Alvito from his advantageous marriage to the daughter of the King of Naples, who sought Papal recognition in return. The power amassed by these four children would not have been possible if the Pope had not acknowledged them openly and elevated them in rank.

Vannozza lived fifteen years longer than her former lover Pope Alexander VI. When she died, in Rome, aged seventy-six, she was given a grand funeral which was organised by the court of Pope Leo X. This dramatic send-off gave Vannozza recognition as a woman who had been the partner of a former Pope and mother of four of his children. 1