This article was written by Carol.

Eleanor of Toledo was born in 1522 as the daughter of Pedro of Toledo, the Spanish Viceroy of the Kingdom of Naples and second cousin to the Emperor Charles V. His brother was the famous Duke of Alba who governed the Austrian Netherlands for the Emperor.

In 1538, she married Cosimo I, Duke of Florence. Cosimo had been interested in allying himself with the Emperor to strengthen his rule in Florence and had hoped to marry the Emperor’s illegitimate daughter Margaret. This was denied him, but Charles V proposed the wealthy and beautiful Eleanor as a bride instead. Cosimo had to pay heavily for the privilege, but he was rewarded with the removal of Spanish troops from Florence shortly after his marriage. 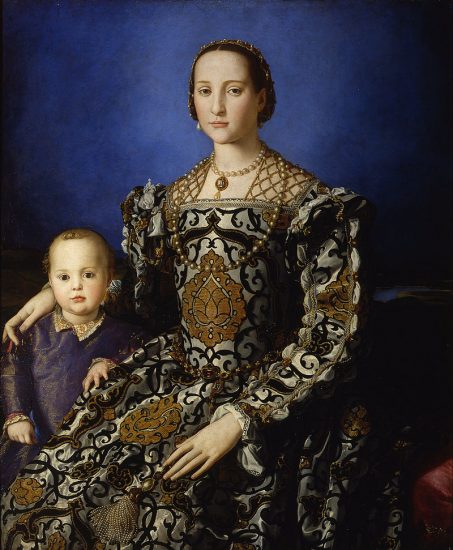 Eleanor was welcomed into Florence on 29 June 1539 with a triumphant procession accompanied by fireworks and entertainment. She was not a first popular with the Florentines, for she was a foreigner who spoke no Italian. But the marriage was a resounding success, and Eleanor and Cosimo were apparently devoted to each other. They had five sons and four daughters. The Venetian ambassador wrote of Cosimo, “There is no hint that he has anything to do with anyone but the Duchess. He lives rather as an outstanding family man, always eating with his wife and children at a moderately plain table. When he goes into the city or the country his wife and children accompany him.“

Eleanor was known to be a gambler and is thought to have also been a difficult taskmaster. Letters that survive show her returning items that did not meet her exact standards for quality or taste. She kept many gold and silver weavers busy creating the elaborate textiles for her wardrobe. But she was also a patron of the arts, a supporter of the Jesuits, a shrewd investor and periodically Regent of Florence.

She is best known for the portraits of her by Bronzino, particularly one in which she is shown with her eldest son. It is thought that these were a public relations effort by Cosimo to bolster the stability and legitimacy of his family after years of debauchery by his Medici predecessors. Bronzino also decorated a private chapel for her in the Palazzo Vecchio, which can be visited today. 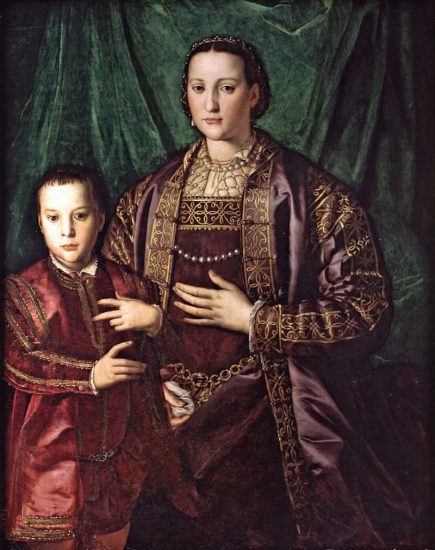 She is also remembered for her renovation of the Pitti Palace which she bought in 1549. Originally Eleanor and Cosimo lived in the Palazzo Vecchio. This was also the administrative seat and housed the militia. She also objected to the noise of the lions that were in an adjacent menagerie. Having grown up in the splendour of the Neapolitan court, she aspired to more. She spent ten years renovating the Pitti Palace and eventually, like many who renovate, she became dismayed by the delays. She set a date for moving, and when the builders did not meet it, the family moved in anyway. The upper floor was for Eleanor and the children, the middle floor for her mother-in-law and the ground floor for Cosimo. They also purchased the land surrounding it for their gardens from a family named Bogoli. The name eventually became corrupted to Boboli, and these are the famous Boboli Gardens.

Eleanor was not able to enjoy her new home for long. In 1562, she was suffering from tuberculosis. Despite the doctor’s warnings of malaria in the area, Cosimo requested that she accompany him on a trip to review several fortifications. Three sons joined them as well, and soon two were dead. Eleanor died six days later, weakened from nursing them. She was only 40 years old. For centuries rumours abounded that one had killed the other and that Cosimo had then slain the perpetrator.

Recent forensic examinations confirmed that they had, in fact, all died of malaria, just as the family said all along. Cosimo was devastated by his loss and soon turned over much of the rule of Florence to his son.