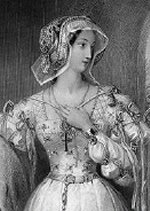 Blanche of Bourbon was born circa 1339 as the daughter of Peter I, Duke of Bourbon and Isabella of Valois. At the age of 14, she was married to King Peter of Castile, who was five years older. It was not to be a happy marriage. Just three days into the marriage Peter abandoned Blanche for his lover Maria de Padilla and had four children with her. Meanwhile, Blanche was in limbo. She was eventually imprisoned at the Castle of Arevalo. She had little support from her French relatives, though her cousin John II of France had appealed to Pope Innocent VI to have Peter excommunicated for having Blanche imprisoned, but the pope refused to cooperate.

Blanche was transferred to Medina Sidonia, which was a lot further south and kept her from a possible rescue by her French relatives. In 1361 Blanche’s keeper was instructed to kill her after Peter had made peace with the King of Aragon. However, her keeper refused to kill her, fearing for disorder in the country. She was then supposedly handed over to a crossbowman who then carried out the execution. Her tomb at the Convent of San Francisco had the following inscription:

Christ most supreme and Holy. Blessed Blanche, Queen of Spain, of Bourbon Father, and from renowned royal French lineage, died with a graceful body; Common knowledge judges her fallen by her husband Peter the Cruel in the year 1361 at the age of 25.

Blanche’s death remains the topic of controversy. Not everyone agrees that she was executed, despite the convenient timing of her death. Her husband was later known as Peter the Cruel. His two surviving daughters by Maria married into the English royal family, and his granddaughter eventually became Queen of Castile as the wife of Henry III of Castile. Peter himself died at the hands of his illegitimate half-brother, who became Henry II of Castile. And Blanche, though Queen of Castile for eight years, is forgotten in history.