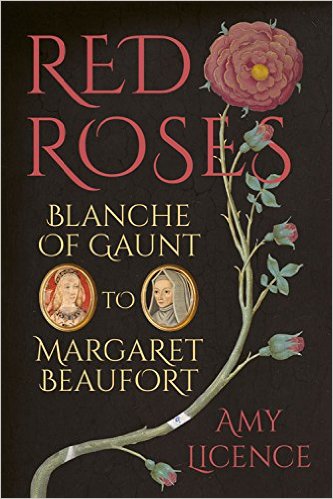 The Wars of the Roses were not just fought by men on the battlefield. Behind the scenes, there were daughters, wives, mistresses, mothers and queens whose lives and influences helped shape the most dramatic of English conflicts. This book traces the story of women on the Lancastrian side, from the children borne by Blanche, wife of John of Gaunt, through the turbulent 15th century to the advent of Margaret Beaufort’s son in 1509, and establishment of the Tudor dynasty. From the secret liaisons of Katherine Swynford and Catherine of Valois to the love lives of Mary de Bohun and Jacquetta of Luxembourg, to the Queenship of Joan of Navarre and Margaret of Anjou, this book explores how these extraordinary women survived in extraordinary times. 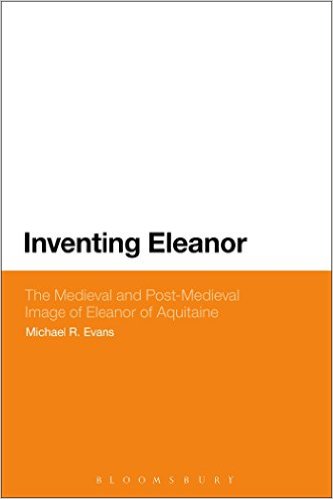 Inventing Eleanor: The Medieval and Post-Medieval Image of Eleanor of Aquitaine

Eleanor of Aquitaine (1124-1204), queen of France and England and mother of two kings, has often been described as one of the most remarkable women of the Middle Ages. Yet her real achievements have been embellished–and even obscured–by myths that have grown up over eight centuries. This process began in her own lifetime, as chroniclers reported rumours of her scandalous conduct on crusade, and has continued ever since. She has been variously viewed as an adulterous queen, a monstrous mother and a jealous murderess, but also as a patron of literature, champion of courtly love and proto-feminist defender of women’s rights. Inventing Eleanor interrogates the myths that have grown up around the figure of Eleanor of Aquitaine and investigates how and why historians and artists have invented an Eleanor who is very different from the 12th-century queen. The book first considers the medieval primary sources and then proceeds to trace the post-medieval development of the image of Eleanor, from demonic queen to feminist icon, in historiography and the broader culture. 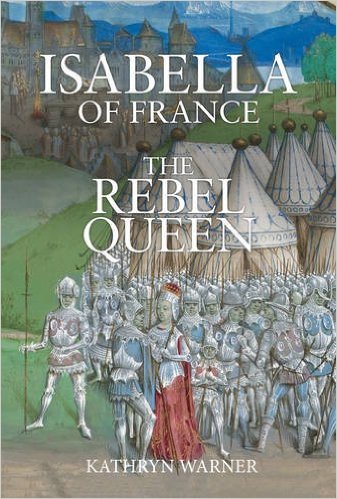 Isabella of France (c. 1295-1358), who married Edward II in January 1308, is one of the most notorious women in English history. In 1325/26, sent to her homeland to negotiate a peace settlement between her husband and her brother Charles IV, Isabella refused to return to England. She began a relationship with her husband’s deadliest enemy, the English baron Roger Mortimer, and with her son, the king’s heir, under their control, the pair led an invasion of England which ultimately resulted in Edward II’s forced abdication in January 1327 in favour of his and Isabella’s son. Isabella and Mortimer ruled England during Edward III’s minority, until he overthrew them in October 1330. A rebel against her own husband and king, regent for her son, Isabella was a powerful, capable, intelligent woman who forced the first ever abdication of a king in England and changed the course of English history. The Rebel Queen examines Isabella’s life with particular focus on her revolutionary actions in the 1320s, corrects the many myths about her, and provides a vivid account of this most fascinating and influential of women. 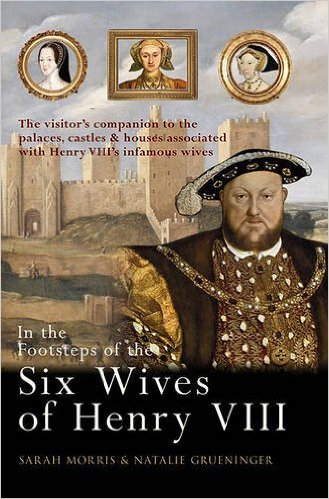 In the Footsteps of the Six Wives of Henry VIII

This guidebook takes a fresh perspective on the tale of Henry VIII’s six wives, by taking you on a journey through a selection of manors, castles, and palaces that played host to Henry s unforgettable queens. Explore the Alhambra Palace in Spain, childhood home of Katherine of Aragon; stand in the very room at Acton Court, where Anne Boleyn and Henry VIII publicly dined; walk the cobbled grounds of Hampton Court Palace, which bore witness to both triumph and tragedy for Jane Seymour; visit Dusseldorf in Germany, birthplace of Anne of Cleves; travel to Gainsborough Old Hall in Lincolnshire, where Henry VIII and Catherine Howard rested on their way to York in 1541 and wander the picturesque gardens and panelled rooms of Sizergh Castle in Cumbria, where Katherine Parr spent time in mourning, after the death of her first husband. Each location is covered by an accessible and informative narrative, which unearths the untold tales and documents the artifacts, as well as providing practical visitor information based on our first-hand experiences of visiting each site. Accompanied by an extensive range of images, including family trees, maps, photographs and sketches, this book brings you closer than ever before to the women behind the legends, as it takes you on your own personal and illuminating journey in the footsteps of the six wives of Henry VIII.” 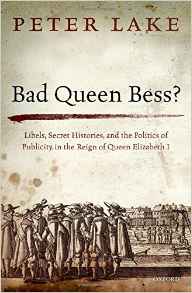 Bad Queen Bess?: Libels, Secret Histories, and the Politics of Publicity in the Reign of Queen Elizabeth I

Bad Queen Bess? analyses the back and forth between the Elizabethan regime and various Catholic critics, who, from the early 1570s to the early 1590s, sought to characterise that regime as a conspiracy of evil counsel. Through a genre novel – the libellous secret history – to English political discourse, various (usually anonymous) Catholic authors claimed to reveal to the public what was ‘really happening’ behind the curtain of official lies and disinformation with which the clique of evil counsellors at the heart of the Elizabethan state habitually cloaked their sinister manoeuvres. Elements within the regime, centred on William Cecil and his circle, replied to these assaults with their own species of plot talk and libellous secret history, specialising in conspiracy-driven accounts of the Catholic, Marian, and then, latterly, Spanish threats.

Peter Lake presents a series of (mutually constitutive) moves and counter moves, in the course of which the regime’s claims to represent a form of public political virtue, to speak for the commonweal and true religion, elicited from certain Catholic critics a simply inverted rhetoric of private political vice, persecution, and tyranny. The resulting exchanges are read not only as a species of ‘political thought’, but as a way of thinking about politics as process and of distinguishing between ‘politics’ and ‘religion’. They are also analysed as modes of political communication and pitch-making – involving print, circulating manuscripts, performance, and rumour – and thus as constitutive of an emergent mode of ‘public politics’ and perhaps of a ‘post reformation public sphere’. While the focus is primarily English, the origins and imbrication of these texts within, and their direct address to, wider European events and audiences is always present. The aim is thus to contribute simultaneously to the political, cultural, intellectual, and religious histories of the period. 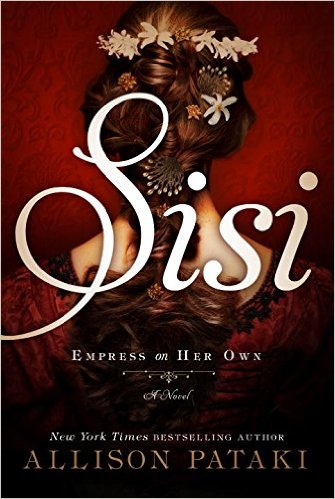 Sisi: Empress on Her Own: A Novel

Married to Emperor Franz Joseph, Elisabeth—fondly known as Sisi—captures the hearts of her people as their “fairy queen,” but beneath that dazzling persona lives a far more complex figure. In mid-nineteenth-century Vienna, the halls of the Hofburg Palace buzz not only with imperial waltzes and champagne but with temptations, rivals, and cutthroat intrigue. Feeling stifled by strict protocols and a turbulent marriage, Sisi grows restless. A free-spirited wanderer, she finds solace at her estate outside Budapest. There she rides her beloved horses and enjoys visits from the Hungarian statesman Count Andrássy, the man with whom she’s unwittingly fallen in love. But tragic news brings Sisi out of her fragile seclusion, forcing her to return to her capital and a world of gossip, envy, and sorrow where a dangerous fate lurks in the shadows.

Through love affairs and loss, dedication and defiance, Sisi struggles against conflicting desires: to fight to keep her family together, to flee amid the collapse of her suffocating marriage and the gathering tumult of the First World War. In an age of crumbling monarchies, Sisi fights to assert her right to the throne beside her husband, to win the love of her people and the world, and to save an empire. But in the end, can she save herself?

Featuring larger-than-life historic figures such as Bavaria’s “Mad King Ludwig” and the tragic Crown Prince Rudolf, and set against many of Europe’s grandest sites—from Germany’s storied Neuschwanstein Castle to England’s lush shires—Sisi brings to life an extraordinary woman and the romantic, volatile era over which she presided. 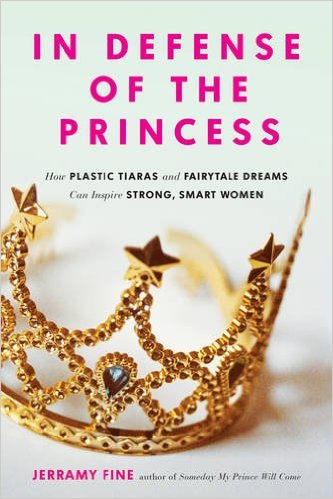 In Defense of the Princess

It’s no secret that most girls, at some point, love all things princess: the poofy dresses, the plastic tiaras, the color pink. Even grown-up women can t get enough of royal weddings and royal gossip. Yet critics claim the princess dream sets little girls up to be weak and submissive, and allows grown women to indulge in fantasies of rescue rather than hard work and self-reliance.

Enter Jerramy Fine an unabashed feminist who is proud of her life-long princess obsession and more than happy to defend it. Through her amusing life story and in-depth research, Fine makes it clear that feminine doesn t mean weak, pink doesn t mean inferior, and girliness is not incompatible with ambition. From 9th century Cinderella to modern-day Frozen, from Princess Diana to Kate Middleton, from Wonder Woman to Princess Leia, Fine valiantly assures us that princesses have always been about power, not passivity. And those who love them can still be confident, intelligent women.

Provocative, insightful, but also witty and personal, In Defense of the Princess empowers girls, women, and parents to dream of happily ever after without any guilt or shame. 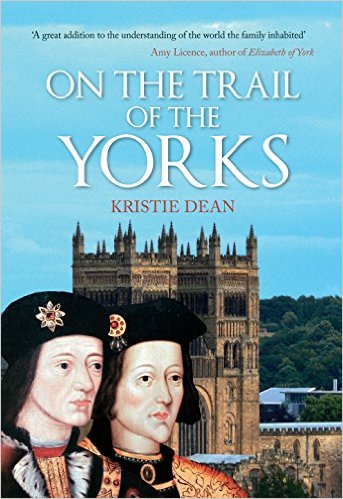 On the Trail of the Yorks

Richard III is probably the House of York’s best-known figure, but the other members of the family are just as intriguing as the king who fell on Bosworth Field. These include his father, the Duke of York, who held a claim to the throne that would eventually topple a king; his older brother Edward IV, a warrior cast in the mould of a true Plantagenet; and the resilient Yorkist queen Elizabeth Woodville and her daughter Elizabeth of York, the latter of whom would eventually unite the family with their longstanding rivals, the Lancastrians, and become the mother of the most infamous dynasty in English history, the Tudors.

This book explores the places associated with members of this fascinating family and discovers their stories through the locations they visited and inhabited. It reveals the lives of the Yorks by exploring the cathedrals, castles, battlefields and manor houses that shaped their history. Featuring locations such as Fotheringhay, Baynard’s Castle, Durham Cathedral and the Palace of Westminster, among many others, this book brings each site to life, giving a gripping account of its heritage as well as accurate information for the visitor. Extensive descriptions and an array of illustrations and photographs recreate these poignant and sometimes controversial locations, immersing the reader in the ancient and intriguing world of the Yorks.