Anne of Bohemia was born on 23 July 1503 as the daughter of King Vladislaus II of Bohemia and Hungary and his third wife Anne of Foix-Candale. Though Vladislaus had been married twice before, Anne and her brother Louis were his only surviving children. She was just 13 when her father died, and she and her brother went into the care of Maximilian I. He arranged for her marriage to Archduke Ferdinand of Austria, who was the second son of Joanna I of Castile. They married on 25 May 1521, and it was stipulated that her husband should succeed Anne’s brother if he died without heirs. This would happen five years later when Louis was killed in battle against Suleiman the Magnificent. Ferdinand claimed Bohemia and Hungary, and he was elected King of Bohemia later that year. Hungary would prove a bit more difficult. 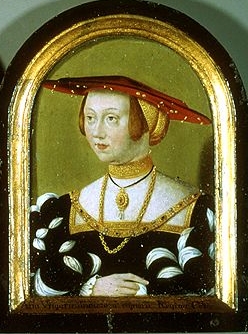 Meanwhile, Anne diligently performed her Queenly duties of producing heirs. They would have a total of fifteen children, of which only two would die in childhood. Anne was known for her piety and charity, and she spoke Latin, Czech, Hungarian and German. She was hardly ever separated from her husband, often accompanying him on his travels, which probably also accounts for the many children. She tragically died three days after giving birth to her last child on 27 January 1547. She is buried in the St. Vitus Cathedral in Prague.

Ferdinand became Emperor nine years after her death, and thus she is not known as Holy Roman Empress.