Princess Ramoma was born in 1829 as the daughter of Prince Razakaratrimo and his wife, Princess Rafarasoa Ramasindrazana. Like her cousin, Rasoherina, she was married to King Radama II, and she was widowed when he was assassinated in 1863. They had no children. 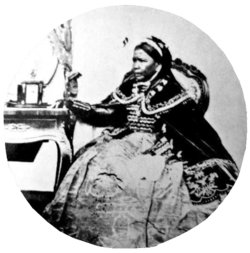 Rasoherina succeeded Radama II as Queen of Madagascar, and she married Prime Minister Rainivoninahitriniony, and later his brother Rainilaiarivony. Meanwhile, Ramoma greatly began to favour the Christian religion. Ramoma became Queen on 1 April 1868 upon the death of Queen Rasoherina, and she took the name Ranavalona II. She entered into a political marriage with the then Prime Minister Rainilaiarivony, his brother Rainivoninahitriniony had died the previous year. She declared Madagascar to be a Christian nation and burned traditional royal talismans in a bonfire in September 1869.

A visitor to her court in 1873 described her.

I should think the queen was about 45 years of age, with a dark olive complexion, and a face full of kindness and benevolence. She was very queenly, and dressed in a gray shot-silk dress, and a silk lamba fell negligently from her shoulders. Her hair was black, and beautifully arranged; ‘crown she did not wear’, but from the hair at the top of her head there depended the long fine gold chain ending in a gold tassel, which only the queen can wear. 1

She died on 13 July 1883, and she was buried in the Tomb of the Queens. She was succeeded by Queen Ranavalona III, who would also be the last Queen.