Mary Stuart was born on 8 December 1542 as the daughter of Mary of Guise and James V of Scotland. She was her parents’ third child, but her two elder brothers had both died on 21 April 1541. Her father died suddenly on 14 December, making Mary Queen regnant at just six days old. Mary was baptised at the Church of St. Michael. As she was just a baby, Scotland was to be ruled by regents. The Earl of Arran, himself next in the line of succession should Mary die, became regent until 1554. Her first proposal of marriage came at just six months of age from England. Henry VIII proposed to marry her to his son, the future Edward VI. The Treaty of Greenwich was signed and Mary was to live in England from the age of 10. Mary was crowned on 9 September 1543 at Stirling Castle’s chapel. Though the marriage treaty was abandoned Henry VIII would not give up so easily and he began a military campaign later known as the ‘Rough Wooing’. Mary was moved around the country for her safety. The regent Arran turned to France for help and in return for Mary’s hand in marriage and a French dukedom for Arran himself the French came to their aid, squashing the Rough Wooing. 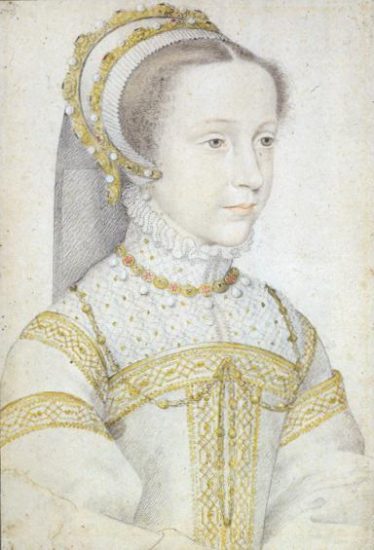 Mary was now betrothed to the Dauphin Francis, and at the age of five, Mary was sent to live in France. She was accompanied by four girls, the “four Marys” and her two illegitimate half-brothers. At the French court, Mary learned to play the lute and the virginals, and she learned several languages. She was close friends with her sister-in-law, Elisabeth of Valois, who later became Queen of Spain. She became especially tall by sixteenth-century standards, eventually measuring 1.80m. Her future husband, Francis, was considered to be abnormally short but the couple got on well. On 4 April 1558 Mary signed a secret agreement bequeathing Scotland, and her claim to the English throne (her grandmother was Margaret Tudor, sister to Henry VIII) to France if she died without issue. She and Francis finally married on 24 April 1558 at the Notre Dame de Paris.

When Mary I of England died in November 1558 many Catholics considered the Scottish Queen to be the rightful Queen of England, despite her exclusion in Henry VIII’s last will and testament. Instead, under the Third Succession Act, Elizabeth I succeeded her sister. Her father-in-law proclaimed his son and Mary King and Queen of England and the royal arms of England were quartered with those of Francis and Mary. Mary became Queen consort of France on 10 July 1559, when her father-in-law died after an accident. She was widowed a year and a half later on 5 December 1560, when Francis died of a middle ear infection, which had led to an abscess in the brain. Mary remained in France for 9 months, but returned to Scotland, arriving in Leith on 19 August 1561. She knew very little about the complex political situation in Scotland and she was a devout Catholic in a country with a strong Protestant faction. Her own half-brother, the Earl of Moray, was the leader of the Protestants. Mary tolerated the Protestants and kept her half-brother as her chief advisor.

Mary now began to look for a new husband. Archduke Charles of Austria, Don Carlos and even Robert Dudley, 1st Earl of Leicester were considered, but the proposals came to nothing. She fell in love with Henry Stuart, Lord Darnley. He was her cousin, as they were both grandchildren of Margaret Tudor. They married at Holyrood Palace on 29 July 1565, despite not having obtained the papal dispensation. Elizabeth I was angry at the marriage as both now had a stronger combined claim to the throne. Henry Stuart was also a Catholic and their marriage caused a Protestant rebellion by the Earl of Moray. The Earl of Moray eventually left Scotland for asylum in England. Her husband too became restless. He demanded the Crown Matrimonial from Mary, which would have made him co-sovereign of Scotland with a right to keep the Scottish throne for himself should he outlive his wife. Mary refused his request and their marriage became strained. By then, Mary was already pregnant.  Their son, the future James VI, was born on 19 June 1566, but the murder of one of Mary’s trusted advisors had led to a complete breakdown of their marriage. Divorce was discussed but it was probably agreed that he should be removed by other means. In the early morning of 10 February 1567 an explosion rocked the former abbey of Kirk o’Field where her husband had been staying and he was found dead in the garden. Mary herself and several nobles came under suspicion, most notably the Earl of Bothwell. He was brought to trial at the request of Mary’s father-in-law, but with no evidence presented, Bothwell was acquitted. The Earl of Bothwell then aspired to marry Mary himself.

Between 21 and 23 April 1567 Mary saw her son at Stirling Castle for the last time. On the way back to Edinburgh on 23 April she was abducted, willingly or not, by the Earl of Bothwell and taken to Dunbar Castle. She was possibly raped there. On 6 May the couple returned to Edinburgh and on 15 May they were married, either at Holyrood Palace or Holyrood Abbey. The Earl of Bothwell had only divorced his first wife 12 days before. The marriage was very unpopular. Several nobles turned against Mary and Bothwell, even raising an army against them. There was no battle as Mary’s forces deserted her. The Earl of Bothwell was allowed to leave, while Mary was taken to Edinburgh. She was imprisoned in Loch Leven Castle where she miscarried twins. On 24 July 1567 Mary was forced to abdicate in favour of her son, while the Earl of Moray was made regent. The Earl of Bothwell went into exile in Denmark, where he was imprisoned and reportedly driven insane.

Mary managed to escape from Loch Leven Castle on 2 May 1568, but the army she raised was defeated, and she fled to England. If she expected help from Elizabeth, she was mistaken. Elizabeth ordered an inquiry into whether Mary was guilty of her husband’s murder. Mary refused to acknowledge the power of any court to try her. The Earl of Moray presented the so-called casket letters as proof of her guilt. The authenticity of these letters is widely debated. The originals were unfortunately destroyed. The inquiry was closed with the verdict that nothing was proven. Mary remained in custody in England.

Over the following years, Mary was moved around a lot and was implicated in plots to remove Elizabeth from the throne. She still continually had over 16 servants, and her belongings required 30 carts to be moved. She spent much of her time doing embroidery and her health steadily declined. In 1586 she was implicated in the Babington Plot, a plot to assassinate Elizabeth. She was moved to Fotheringhay Castle and was put on trial for treason. She was convicted on 25 October 1586 and sentenced to death. Elizabeth hesitated in ordering her execution, and she reluctantly signed the death warrant on 1 February 1587. On 8 February 1587 Mary was executed. Her last words were, “In manus tuas, Domine, commendo spiritum meum” (“Into thy hands, O Lord, I commend my spirit”). It took two blows of the axe to remove her head from her body. Mary had wished to be buried in France, but she was instead buried in Peterborough Cathedral until her son had her body exhumed in 1612 and moved to Westminster Abbey.