Louise of the Netherlands was born 5 August 1828 in The Hague to Prince Frederick of the Netherlands and Princess Louise of Prussia. She received a good education early on from her Belgian governess Victoire Wauthier and studied German, Russian, English, French, and piano. At the age of 20, Louise was selected as a suitable partner for the heir to the Swedish throne, Crown Prince Charles. After years of having Catholic queens on the throne, the King was determined to find a Protestant princess, preferably one from the old royal dynasties of Europe. In Louise, he found both.

In August 1849, a meeting between the young royals was arranged in The Hague. Louise fell in love instantly, while the Crown Prince had been disappointed in her appearance.1Nevertheless, he agreed to marry her, and their engagement was declared in February the following year. Louise began preparing for her new role by studying the Swedish language and history. Together with her parents and sister, she travelled from Germany to Stockholm just in time for the big day. The ceremony took place at Storkyrkan on 19 June 1850. After the wedding, the King invited his new daughter-in-law to go on a tour through her new home country.

Louise and Charles had very different personalities. Charles was social, loved parties and masquerade balls, and had many mistresses. Louise was introverted and shy and preferred spending time at home to focus on her family. The couple had two children, Louise and Carl Oscar. Due to complications from the birth of her second child, Louise was unable to have more children. When their only son died from measles and pneumonia in 1854, Louise offered her husband a divorce. He declined but continued to be unfaithful.

From 1852 until 1860, Charles was in a relationship with Louise’s maid of honour, Josephine Sparre. Out-going and dominant, she acted more like a Crown Princess than the Crown Princess herself, who was so shy and reserved that she let her husband’s lover control their lives. People at court knew about the Crown Prince’s negligence towards Louise, who was given sympathy. She did what she could to compete with the other women and entertain her husband but without luck. One event that serves as a typical example of Charles’s treatment of his wife took place at a birthday garden party for Louise, when he proposed a toast to “his secret love” in the presence of both women.2 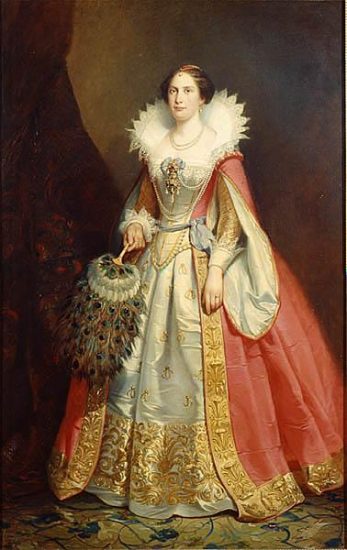 The King died in 1859 and Louise became Queen of Sweden and Norway. She was the first Queen to be crowned in Norway since the Middle Ages, as both of her predecessors had been Catholic, and the neighbouring country had refused to crown them. Louise never tried to intervene in political matters which was appreciated at court, although she kept herself updated on politics and enjoyed discussing her opinions with friends. Instead, she focused on Philanthropy and created a large number of charities. She loved music and history, took piano lessons, and translated books from Dutch to Swedish. She made swimming acceptable and even fashionable for women by taking classes together with her daughter, and she hired Sweden’s first female dentist. With her good manners and reserved personality, she was considered a good role model for women at the time.

Louise dealt with serious health issues throughout her adult life. She suffered from epileptic seizures, possibly caused by the stress of her unhappy marriage. At the end of 1870, after visiting her mother on her deathbed in the Netherlands and then taking care of her sick husband once back in Stockholm, the exhausted Queen fell ill with pneumonia. Knowing she was dying, Louise and Charles had long and dramatic conversations. She apologised for not treating him well enough, while he blamed himself for her lifelong misery.