Lillian May Davies was born on 30 August 1915 in Wales, to miner William Davis and his wife, Gladys. She grew up in the slums of Swansea with her mother, after her father had abandoned the family.

In 1931, 16-year-old Lillian moved to London with hopes of a modelling contract. She had dropped the second “l” in her name as she thought “Lilian” was more glamorous and worked as a maid to support herself. Strikingly beautiful, Lilian was eventually hired for advertisements jobs and appearances in high-end fashion magazines, including Vogue and Harper’s Bazaar. She was even offered film roles, and it was there, on the set of a movie, where she would meet her first husband, Scottish actor Ivan Craig. The couple married in September of 1940, but the very next day, Ivan was called into war.

The son of King Gustav VI Adolf of Sweden and his first wife, Princess Margaret of Connaught, Prince Bertil arrived in London in 1943 to work as a naval attaché at the Swedish embassy. Lilian had started working at a hospital for wounded soldiers, and in a factory for the Royal Navy. During a night out at a local club, the Swedish royal was introduced to the Welsh beauty by the bar’s owner. They kept in touch and started seeing each other. She would invite him over for cocktail parties with mutual friends. He would pick her up with his motorcycle for romantic rides in the city.

Socialite life aside, the reality of the war struck when Lilian’s London home was severely damaged in a devastating bombing. She was able to call Bertil, who risked his life to go and look for her. She was found safe, and he invited her to spend the night at his house. She did, and would never return home again.

By 1947, the Craig marriage was officially over. Lilian was in love with Bertil, and after having been separated from his wife for years, Ivan too had met someone else. In an attempt to resolve the situation in a friendly spirit, Bertil contacted Ivan, who told him;

“Whatever you do, promise me to always take care of Lilian.”1

The Prince kept his promise, and in her memoirs, Lilian wrote:

“He was so handsome, my prince. Especially in uniform. So charming and thoughtful, and so funny.”2 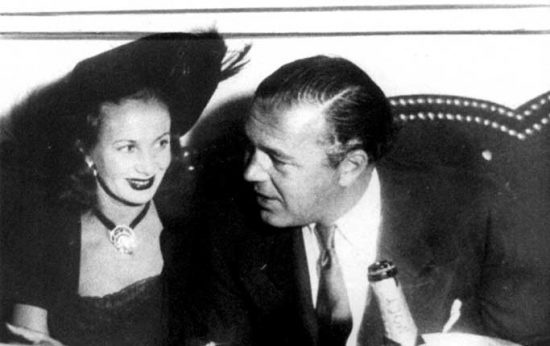 Despite being deeply in love, the relationship appeared doomed from the start; not only was Lilian a commoner, she was divorced. Also, a series of events within the Swedish royal family would further complicate their chances of a future together. In 1947, Bertil’s eldest brother, Prince Gustav Adolf, was tragically killed in a plane crash. The other male siblings, Prince Sigvard and Prince Carl Johan, had both lost their royal titles by marrying commoners. This put Bertil in a difficult position; he was now closer than ever to inherit the Swedish throne. In order to avoid a constitutional crisis, he promised his father not to marry Lilian, or at least not until his nephew, Prince Carl Gustaf, had found a suitable wife.

Bertil and Lilian remained a couple, and settled down in the royal family’s private Villa Mirage in Sainte-Maxime, on the French Riviera. They would stay in France for many years to come. In 1956, they moved to Stockholm. The press knew about the relationship, but would not write about them out of respect, and although their relationship was called “an official secret” within Stockholm society, they were able to live a somewhat discrete life in the capital. Lilian did not participate in official engagements but would appear together with the Prince at private social events.

In 1976, King Carl XVI Gustaf married the future Queen of Sweden, Silvia Sommerlath, and after 33 years together, Bertil and Lilian were finally allowed to marry. Their wedding took place later that same year, on December 7, in the royal chapel at Drottningholm Palace in Stockholm.

In a television interview conducted after the wedding ceremony, the couple thanked the Swedish media for its loyalty throughout the years and said that although they would have liked to have had children, they were still deeply happy.

They were given nearly 20 years together as husband and wife. In January of 1997, Prince Bertil died at the age of 84 after a short illness. Lilian continued to carry out her royal duties and remained a highly popular member of the Swedish royal family. She was known for her sense of humour, charm and wit, and was called “Auntie Lilian” by the King’s children. In 2010, it was revealed that the Princess was suffering from Alzheimer. Three years later, in March of 2013, Lilian passed away at her home Villa Solbacken in Stockholm. She was 97 years old.

Bertil and Lilian’s story touched an entire nation, and they were adored by the Swedish people. Their love was strong enough to survive decades of obstacles. To use the Princess’ own words;

“If I were to sum up my life, everything has been about my love.”