I was very excited to receive this book from Amberley Publishing. This is the story of Joan of Kent, the First Princess of Wales. Besides being married into the royal family, she actually belonged to it by blood. She was the daughter of Edmund of Woodstock and Margaret Wake, who was Baroness Wake of Liddell in her own right. Her father Edmund was the son of King Edward I and his second wife, Margaret of France. Edmund was executed in the aftermath of the deposition of his half-brother, whom he supported.

The book chronicles us all through Joan’s amazing life, and I do believe it’s the first book to do so. Joan must’ve been a good match in marriage as the granddaughter of a king, so it is surprising that she made a marriage of her own by the age of 12. She married Thomas Holland (Holand) without the required permission from the king. Thomas was 14 years older than she was and surprisingly enough he left Joan to face the consequences all by herself when he was overseas. Joan was forced to marry William Montacute, and she later claimed she did not reveal her earlier marriage because she was afraid Thomas would be executed. She was thus caught in a bigamous marriage. It was only when Thomas returned seven years later the truth came out, and Joan supported Thomas’ version of the events. Through several popes, the marriage to William was eventually annulled, and the marriage to Thomas was confirmed, She was now officially Lady Holland. Joan also came into quite an inheritance when the last of her siblings died in 1352, and she became the Countess of Kent in her own right. Thomas and Joan had several children together, despite this rocky start. Thomas died in 1360 and Joan became a widow at the age of 32.

Shortly after Thomas’ death Joan married her first cousin once removed, Edward the Black Prince. They had known each other since early childhood. It was not a popular match, considering Joan’s dubious marital history and their close relationship. A special dispensation was provided by the pope to allow the two to marry.  Never before had England had a Princess of Wales. Both Edward’s father and grandfather had already been king when they married thus their wives were never Princesses of Wales. Another title was also new. Edward was created Prince of Aquitaine in 1362. This title was never used again, so she also holds the distinction of being the only Princess of Aquitaine. Joan and Edward had two sons, but the elder and Edward’s namesake died at the age of six. His second son Richard eventually succeeded his grandfather as Richard II. Edward died in 1376, probably of some sort of illness he’d had for a while. He was only 45 years old.

And once again, Joan was a widow. The book described the events surrounding Edward’s death quite vividly, including Joan’s worries about her son not being accepted as legitimate due to her dubious marital history. This worry turned out to be unfounded, but she was certainly very concerned about it. She was a positive influence on her son after his accession. She was only the third woman to be made a Lady of the Garter in 1378. With Richard seemingly settled in Joan considered retirement from public life and the last thing she arranged was Richard’s marriage to Anne of Bohemia. She encountered rebels during the Peasants’ Revolt, but they left her unharmed. 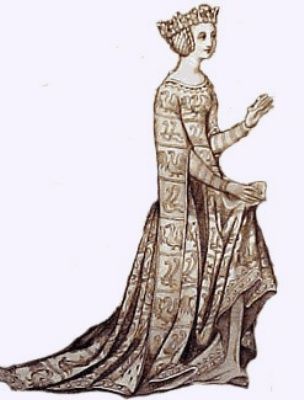 She probably retired voluntarily. She was a very popular member of the royal family, but by that time she was 53 and probably intended to live a quieter life. She retired to Wallingford Castle, which was a part of her dowry.

She died suddenly on 8 August 1385 after she had been unable to settle a row between her sons Richard and John, but she had probably been ill for a while. She was not buried beside her husband, perhaps afraid that his prominent burial-place in the Canterbury Cathedral would again call into questions Richard’s legitimacy. She was buried in Greyfriars, Stamford with her first husband. Only the gatehouse remains of her burial-place.

Her life was quite extraordinary. She stood up for the husband she believed in when she first married him at the age of just 12 and made a second brilliant match that was most likely a love match as well. She had several surviving children but knew the loss of a young child as well. The research for this book is obviously well done and gives a vivid account into the life of a woman we did not know much about up to this point. It is certainly a must-read for all history lovers.

The book has already been released on the UK Amazon site but has a release date of 19 April on the US site.