Emilia of Nassau was the fifth but third surviving child of William the Silent and his second wife, Anna of Saxony. She was born on 10 April 1569 in Cologne. She was named after the Countess of Neuenahr, who was the head of Anna’s household. From the beginning, she was under the care of a wet-nurse and two servants. Shortly after Emilia was born, Anna began an affair with Jan Rubens, a lawyer who later became the father of the famous painter Peter Paul Rubens. This did not go unnoticed, and Anna gave birth to their illegitimate daughter in 1571. She would never see her mother again; Anna died imprisoned by her relatives in 1577.

Emilia spent her youth in Dillenburg, but she probably saw very little of her father. He had left Dillenburg in 1572, never to return to his place of birth again. She probably led a relatively simple life due to a lack of money. She lived there with her uncle John, his wife Elisabeth of Leuchtenberg and her grandmother Juliana of Stolberg. Her cousins and siblings also lived with them. She was forced to move to Siegen several times due to the plague in the area of Dillenburg. Her mother’s illegitimate daughter soon joined them at Dillenburg. Emilia received her education in religion, languages and courtly manners. She was raised in the Calvinistic teachings. Her grandmother died in 1580, and so many people came to the funeral that Emilia was forced to share her own room. Even more tragically, Emilia’s father was assassinated on 10 July 1584.

Emilia remained at Dillenburg and received a stipend of 100 guilders per month from her father’s legacy. Louise de Coligny, her father’s fourth and final wife, was a kind woman and she once wrote to Emilia’s uncle that she believed that Emilia’s spoke no French and that was the reason they had never written before. However, Emilia had learned the language in her youth. With this assurance and Louise’s promise that she would love Emilia like her own daughter, 17-year-old Emilia decided to travel to the Netherlands. She left Dillenburg on 8 October 1587 and arrived on 1 November. She was present at the wedding of her (full) sister Anna to their first cousin, William Louis, Count of Nassau-Dillenburg, eldest son of uncle John. Tragically, Anna died after just seven months of marriage. With Anna’s death, Emilia no longer wished to remain in Friesland and travelled to Delft, the place where her father had been assassinated. She lived with her half-sister Maria in the Prinsenhof, but she didn’t enjoy living there. There wasn’t much to do. 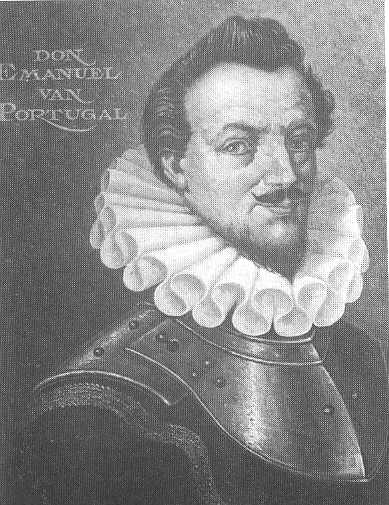 She attended the wedding of her half-sister Maria to Count Philip of Hohenlohe-Neuenstein in Buren in 1595 and later that same year she attended the wedding of George Everard, Count of Solms and Sabina, Countess of Egmond and Princess of Gaveren in Delft. She met her future husband when he visited Delft. Manuel of Portugal was the illegitimate son of António, Prior of Crato, pretender to the Portuguese throne during the 1580 Portuguese succession crisis. After his father was (briefly) proclaimed King of Portugal, Manuel was created a Prince of Portugal. For the time, Emilia was already well on her way to spinsterhood. She had already seen five of her sisters married, including three that were younger than her.  They enjoyed talking to one another, and he came to her court more and more. When they finally spoke of their wish to marry out loud, it was met with some scepticism. Her brother Maurice assumed it was a phase and initially ignored it. When it became clear that it wasn’t a phase, there was trouble. Manuel was a Roman Catholic, a pretender to the Portuguese throne and he was penniless. Although they were forbidden to meet, they continued to meet in secret.

She kept attempting to get her brother’s permission to marry, but when it never came, they decided to elope. They married in both a Reformed and a Catholic service on 7 November 1597. Emilia was confined to her rooms after informing the States-General, but Manuel bypassed the guards upon which she declared that he was her lawful husband and that she would not divorce him. The days surrounding their wedding had been so stressful that Emilia fell ill. Manuel was told not to go to her and eventually Emilia refused to eat. Manuel was told to go south to await the decision of Emilia’s brother, but he had nowhere to go. Emilia was told to go to Delft. After several weeks, Manuel was ordered to leave the Netherlands. Emilia promptly followed him. 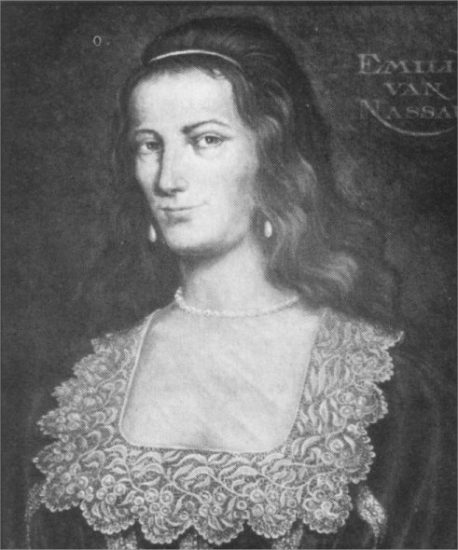 They were soon asking to come back. Emilia was pregnant and wanted to give birth in the Netherlands. By September 1598, they were back in Delft. Their first child, a daughter, was presumably born before they arrived in Delft. Maurice declined to be the child’s godfather. The child probably died in infancy. A second daughter named Maria Belgica was born, and she survived. On 24 February 1600, she gave birth to her first son, named Manuel after his father. A second son was named William. In 1602, they had a daughter who died after suffocating in her crib. Daughters Emilia Louise and Anna Louise followed. In 1606 or 1607, they were joined by another daughter named Juliana Catharina, followed by Eleanora Mauritia in 1609. Their last child was yet another daughter, named Sabina Delphica.

By 1609, Emilia and Maurice had reconciled somewhat, and Manuel even joined Maurice in his travels. That same year, they had a new castle built in Wijchen, but they didn’t spend much time there. In 1622, she became acquainted with Elizabeth Stuart, the Winter Queen who was staying The Hague. Once, Emilia went to visit the Queen on foot, but she fell and suffered an injury to her leg. Not much later, the couple decided to live separately, due to money issues.  Emilia departed with their six daughters to Geneva, while Manuel left for Brussels. She even put their castle in Wijchen up for sale, but it never sold. Around 1628, Emilia became fell ill and her health quickly deteriorated. She made a will on 22 February 1629, and she died on 16 March at 9 in the morning. She was buried in the Cathedral of Geneva on 18 March. 1