Emilia Secunda Antwerpiana of Nassau, also known as Amelie, was born on 9 December 1581 as the sixth and last daughter of William of Orange and Charlotte of Bourbon. She received the name Secundia because a daughter from William’s previous marriage was also named Emilia. Emilia never knew her mother, who died just five months after she was born. Her father remarried the next year to Louise de Coligny, but he too died not much later. In the time between, she was cared for by Maria, her elder half-sister from her father’s first marriage. She lived in Leiden, Vlissingen and from the age of 10, at Noordeinde Palace in The Hague. 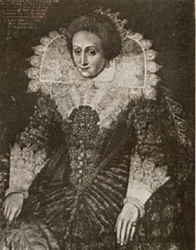 When her sister Louise Juliana married Frederick IV, Elector Palatine in 1593, the 12-year-old Emilia moved with her sister to Heidelberg. Around 1600 there were rumours of a possible marriage between Emilia and John II, Count Palatine of Zweibrücken but he eventually married Catherine de Rohan. Around 1604, Louise de Coligny writes to Emilia’s sister Charlotte Brabantina about a possible marriage to a Polish prince, but once more no marriage takes place. This could have several reasons, but the most likely reason is the lack of money.

Emilia quickly fell pregnant and gave birth to their first child, a son, on 14 August 1617, but he died just one day later. On 27 October 1619, she gave birth to another son, Frederik Louis, who survived. In 1621 Emilia and her husband were forced to flee from Landsberg to Strasbourg, where a third son was born. He died within the year.

Emilia had a close relationship with her sisters, and they often wrote to each other. A letter from Emilia to Charlotte Brabantina survives where she thanks her sister for a pair of earrings.

While her husband died in exile, Emilia was finally able to return to Landsberg in 1648. She would outlive all her brothers and sisters. She died on 28 September 1657, and she was buried in Meisenheim. 1