Elisabeth of Nassau was born on 26 April 1577 in Middelburg as the second of the six daughters of William the Silent and his third wife Charlotte of Bourbon. She was named after Queen Elizabeth I of England, who was also her godmother. 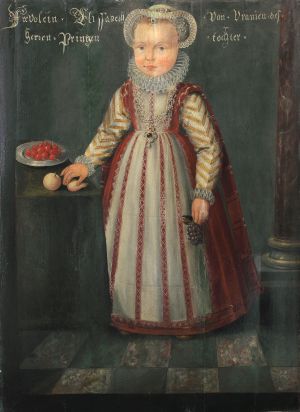 Elisabeth was orphaned at a young age. Her mother died of exhaustion in 1582 after caring for her father after a failed assassination attempt. Her father was eventually assassinated in 1584. She was taken in by her stepmother, Louise de Coligny after her maternal family wished to have Elisabeth come to France for a Catholic education. Elisabeth grew up in The Hague, together with her sisters and her half-brother Frederick Henry.

Louise tried to find her step-daughters good marriages and Elisabeth and her younger sister Charlotte were introduced at the French court of Henry IV in 1594. Elisabeth’s hand was requested by Henri de La Tour d’Auvergne, Duke of Bouillon, a widower who was 22 years older than her. They married on 15 April 1595 and settled in Sedan.

The couple would go on to have eight children, despite the fact that her husband was away a lot. Once Henry IV had converted to Catholicism Elisabeth’s husband became the leader of the Protestant resistance. He was eventually forced to flee to Germany in 1603. Elisabeth, fearing for her own safety, fled to Turenne, where she gave birth to a stillborn son. He was eventually allowed to return to Sedan, and they turned it into an impressive Calvinistic centre.

Elisabeth was widowed in 1623, and she became regent for her 17-year-old son Frederick Maurice. Although this was formally only to last until 1626, she was regent until her death. Elisabeth died on 3 September 1642, shortly before Sedan was overrun by French troops. Claude Sarrau, a French writer, wrote of the events, “God loved Madame de Bouillon so much that he let her die before.” Elisabeth was interred in the Parish Church in Sedan but was reburied twice after the Parish Church went Catholic. 1