Draginja Obrenović was born as the daughter of Pantelija Milićević Lunjevica and Anđelija Koljević on 11 September 1864. She was educated in Belgrade and learned several languages. Her first marriage was to Svetozar Masin in 1883. They were married for only three years when he died. After that, she joined the household of Queen Natalia of Serbia, as a lady-in-waiting.

She apparently met Queen Natalia’s son Alexander in 1895 in Biarritz, where he saved her from drowning. They began writing to each other, but due to Draga’s rank, it was highly disapproved of by his mother. Draga remained in the service of Queen Natalia until 1897, before returning to Belgrade. Alexander’s father had abdicated in favour of his son in 1889, and he was now King Alexander I of Serbia.

Draga and Alexander were married on 5 August 1900, but the marriage was unpopular with the people and with the Dowager Queen. Alexander responded by exiling his mother. The rumour that Alexander might name one of Draga’s brother as heir to the throne was the last straw. On the night of 10-11 June 1903, a group of army officers invaded the palace. A palace aid was captured, and he eventually revealed the hiding place of the King and Queen. Once found, they were both brutally murdered with swords and weapons. Their mutilated bodies were thrown from the palace balcony, and Draga’s two brothers were executed by firing squad later that same day. 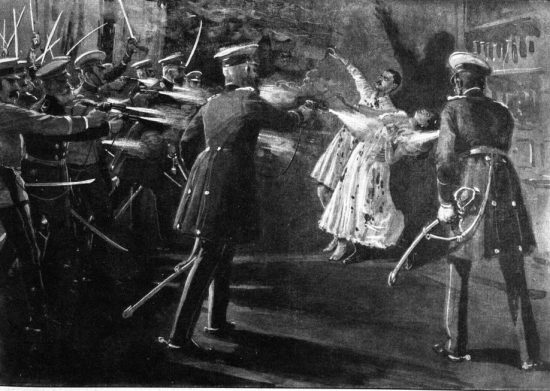 One account of the night states that the assassination squad “burst into the little palace, found the King and Queen cowering in a closet (both in silken nightgowns), stabbed them and chucked them out the window onto garden manure heaps, hacking off Alexander’s fingers when he clung desperately to the sill”.1