This article was written by Sophie Strid.

Princess Therese of Saxe-Altenburg was born 21 December 1836 to Prince Eduard of Saxe-Altenburg and Princess Amalie of Hohenzollern-Sigmaringen. Born at Triesdorf Castle in Bavaria, she grew up in Munich where her father did his military service. Therese’s childhood was paved with tragedies. Her mother died at the age of 25, barely a week after she had given birth to her youngest son, Johann. Therese was only five years old at the time. Her father re-married shortly after and had two more children. Sadly, in 1844, Therese’s brothers Ludwig and Johann both died of scarlet fever. After the death of her father in 1852, 16-year-old Therese lived with her cousin, Queen Marie of Hannover, and later on with her maternal uncle, Prince Carl of Hohenzollern-Sigmaringen.

The German Princess first met her future husband, Prince August of Sweden and Norway, in Hannover in 1852. Many years later, in 1864, she received a visit from him in Düsseldorf. After spending a week together, their engagement was announced on 7 January. The wedding took place on 16 April in Altenburg, and Therese was styled Teresia, Princess of Sweden and Norway, Duchess of Dalarna. 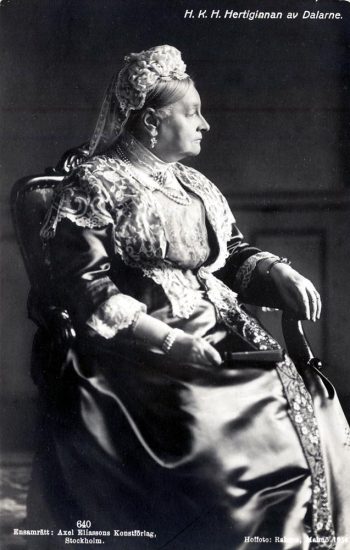 Described as small and fragile, Therese struggled with mental health issues throughout her adult life. She never had any children, and although the couple were good friends and enjoyed each other’s company, their marriage was not romantic. The Princess frequently travelled to the island of Gotland to spend time with her sister-in-law, Princess Eugenie, whom she considered to be a close friend. Therese loved music (a passion she shared with Eugenie), wrote her own compositions, and would often visit the headquarters of The Royal Swedish Academy of Music in Stockholm.

In 1873, Prince August died after battling pleuritis. Therese’s mental health quickly deteriorated, and she was eventually declared legally incompetent. Statesman Louis De Geer was assigned as her guardian. Therese could not get her mind off a certain man called Ohan Demirgian, whom she had first met in 1869 when his presence at court had caused quite the scandal. An Egyptian-Armenian diplomat and the favourite of King Charles XV, Demirgian was rumoured to have been a pimp and offered to help the Duchess find a new husband. These plans were never implemented as Therese was declared to be “out of her senses”, as writer Fritz Von Dardel remarked in 1875. Her relatives in Germany ordered her to go to Switzerland for treatment. She remained there during the winter.

By 1890, Therese was feeling better and thus allowed to return to Stockholm. She resided at Haga Palace and was commonly called “The Haga Duchess”. During her last years, the Princess developed a strong interest in cooking and became famous for her recipes. She eventually gained a lot of weight and became seriously ill. Therese died on 9 November 1914 at the age of 77. She is buried in Riddarholmskyrkan.