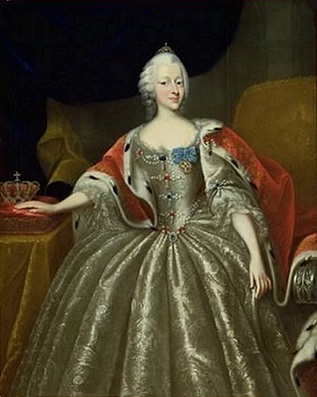 Louise of  Denmark was born on 19 October 1726 as the daughter of King Christian VI of Denmark and Sophie Magdalene of Brandenburg-Kulmbach. She was described as a lively person, who did not fit in well into her parents’ court, which was quite rigid. She suffered from a stammer, and her father often complained of her rebellious nature. She was soon the subject of marriage negotiations, her father perhaps hoping to reign her in. She was considered as a bride for a younger son of George II of Great Britain, the Duke of Cumberland. She was also considered for Adolf Frederick of Sweden.

Nothing came of these negotiations, and it appears that Louise’s had an affair with a valet de chambre, or page, from a noble family called Ahlefeldt. The page was imprisoned in Munkholm Fortress for what happened. He was released in November 1752. It is possible that Louise had a son by him in 1749. 1 It would account for the hasty marriage that was arranged for her later that year. She was married off to Ernest Frederick III, Duke of Saxe-Hildburghausen, with a very large dowry. They were married on 1 October 1749 at Hirschholm Palace.

The couple lived at Hildburghausen, and they had a daughter, named Princess Frederica Sophie Juliane Caroline, in 1755. Unfortunately, their daughter lived for only a year. Louise would follow her soon after. Louise died on 8 August 1756, of unknown causes. She was buried in the family crypt at Hildburghausen Castle, but that was mostly destroyed in the Second World War. Her husband remarried twice after her death.