Anne of Kiev was born into obscurity. There is no certainty about her date of birth though it’s estimated to be between 1024 and 1036 to Yaroslov the Wise and Ingegerd Olofsdotter of Sweden. Henry I of France had recently lost his wife, Matilda of Frisia and he was looking for a new wife who was not related to him within legal degrees of kinship. An ambassador was sent to Kiev and Anne, also known as Agnes was chosen. They were married at the Cathedral of Reims on 19 May 1051. They would have four children, of which three would live to adulthood. Anne participated in politics, even more so after her husband died. Her signature in old Slavic survives to this day.

She was praised by Pope Nicholas II, who wrote to her:

“Honourable Lady, the fame of your virtues has reached our ears, and, with great joy, we hear that you are performing your royal duties at this very Christian state with commendable zeal and brilliant mind.” 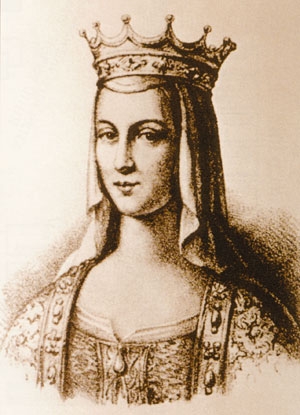 Even Henry himself recognized her abilities. Several decrees bear the inscriptions:  “With the consent of my wife Anna” and “In the presence of Queen Anna”. When Anne was widowed in 1060 she served as regent for her son Philip, who was just eight years old at the time. She was the first Queen of France to do so. She fell in love (again?) after her husband’s death with the married Count Ralph III of Valois, who repudiated his wife to marry Anne. The repudiated wife was not amused and appealed to Pope Alexander II, who excommunicated them. Philip eventually forgave his mother. He himself would repudiate his wife Bertha of Holland in 1092! Anne returned to court after Ralph’s death in 1074. She died just one year later at Villiers Abbey and she was buried at the abbey as well.