In the history of royals, sibling rivalry is a very common subject. We probably all can think of an example when a younger brother coveted his elder brother’s crown or plotted his fall from power. But it was not always brother versus brother. When there were no brothers alive, the disputed succession could be sister versus sister.

King Wenceslaus II of Bohemia was the last remaining legitimate male of Bohemia’s royal Premyslid dynasty when he came to the throne in 1271. He married Judith, daughter of the first Habsburg king, Rudolph I of Germany. She gave birth to 10 children in quick succession, including a set of twins, Wenceslaus and Agnes. However, this constant childbearing took a toll on the young queen, and she died in 1297, giving birth to a namesake daughter who died the same day. By this time, there were only four surviving children in this brood; one boy and three girls. They were: Wenceslaus (b.1289), his twin sister Agnes had died in 1296, Anne (b.1290), Elisabeth (b.1292) and Margaret (b. 1296).

With just one son, Wenceslaus II’s dynasty was in jeopardy. In 1300 he remarried with Elizabeth-Richeza of Poland. She bore him a daughter, Agnes in June 1305, but Wenceslaus died of tuberculosis just six days later. His 15-year-old son, Wenceslaus, became the new king of Bohemia. Wenceslaus III’s reign would not last for long though. The next year he was assassinated under mysterious circumstances, leaving no legitimate children. Bohemia was due for a succession crisis.

Originally, it was not the two sisters who fought against each other, but Henry, Duke of Carinthia, husband of the eldest sister Anne, and Rudolf of Habsburg, son of King Albert I of Germany, and first cousin of Anne. Being married to an heiress of the Premyslid dynasty, Henry of Carinthia had a better claim to the Bohemian throne. Henry was elected as King of Bohemia by the Bohemian nobles, but Anne remained as his consort. Rudolf of Habsburg married Wenceslaus II’s widow, Elizabeth-Richeza of Poland to strengthen his claim. Soon after the election of Henry, Albert of Germany campaigned for his son to be the new king of Bohemia. Henry was soon deposed, and Rudolf became the new king in 1306. Rudolf was never accepted by the Bohemian nobles as their king, and his reign was short-lived. He died the next year, and Henry and Anne were on the Bohemian throne once again.

By this time, Anne’s youngest full-sister, Margaret was already married, but the middle sister, Elisabeth was not. Margaret’s husband, Duke Boleslaw III of Wroclaw was a rival candidate for the Bohemian throne. Anne and Henry realised that it was important for Elizabeth to marry, but they needed to be cautious to find her a husband who would not threaten their still shaky position on the throne. They offered her hand to their trusted allies, but she refused every single one of them. The relationship between Anne and Elisabeth deteriorated.

Soon there was another plot to depose Anne and Henry. Elisabeth was at the centre of this plot, the main candidate to replace her sister and brother-in-law. Many Bohemian nobles were opposed to Henry of Carinthia, so they were hoping to find a suitable husband for Elisabeth to replace him.

On 29 June 1310, an assembly was called for the deposition of Henry of Carinthia from the Bohemian throne. Elisabeth secretly escaped from Prague to attend this assembly. Holy Roman Emperor, Henry VII had one son, John, aged fourteen. Many saw him as a possible husband for Elisabeth, but Henry wasn’t so sure about sending his only son to Bohemia. Instead, he offered his brother, Waleran instead. But John was the preferred candidate, and eventually, Emperor Henry agreed to the marriage. 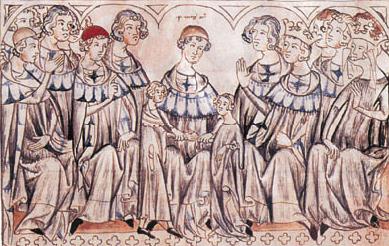 On 1 September 1310, Elisabeth and John were married in a magnificent ceremony at Speyer Cathedral. After the festivities of the wedding had ended, the young couple set off to Bohemia with the intention of deposing Henry and Anne. With the support of Emperor Henry and local nobles, John and Elisabeth were able to capture Prague on 3 December 1310. Henry of Carinthia and Anne were deposed for a second and final time. John and Elisabeth were crowned as King and Queen of Bohemia on 7 February 1311. Henry and Anne were exiled to Henry’s homeland of Carinthia, never to return. Anne died in 1313 with no children.

Just like her sister Anne, Elisabeth was never recognised as a queen regnant, both sisters remained queen consorts, even though their husbands gained the Bohemian crown through their marriages. The marriage of Elisabeth and John produced seven children but unfortunately was not a happy one.

About CaraBeth 35 Articles
I love reading and writing about the royals of medieval Europe- especially the women. My interest was first started by the Plantagenet dynasty, but I decided to dive deeper, and discovered that there were many more fascinating royal dynasties in medieval Europe. Other dynasties I like reading and writing about are; the Capets, and their Angevin branch in Naples and Hungary, the Luxembourgs, the early Hapsburgs, the Arpads, the Piasts, the Premyslids and many more!