From 1130, the Italian island of Sicily was a kingdom.  What most don’t know, it was a county before it became a kingdom. The island was conquered by the Normans in 1071, and Roger de Hauteville, a minor Norman noble became Count Roger I of Sicily. He married three times, and it was his third wife, Adelaide, that the Kings of Sicily were descended from. At this time, Sicily had a very diverse culture: Normans, Italians, Greeks, and Arabs all inhabited the island. The Kingdom of Sicily was not just limited to the island; it also included the southern tip of Italy. 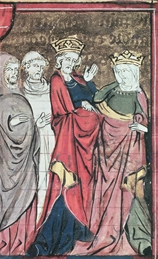 Adelaide del Vasto was born around 1075.  Her father was Manfred del Vasto, a younger brother of Boniface, Margrave of Savona, in Italy. She was from the Aleramici, one of Italy’s most powerful noble families at the time. The identity of her mother is unknown.  Around 1090, at the age of fifteen, she married the much-older, twice widowed, Count Roger I of Sicily. Adelaide’s marriage was part of a complex set of alliances; her two sisters were betrothed to two of Roger’s sons.  One of these sons, Jordan was illegitimate. The other one, Godfrey, died before the marriage could take place. Adelaide’s brother, Henry married one of Roger’s daughters from a previous marriage.  Roger’s first two wives, Judith of Evreux, and Eremburga of Mortain were Normans, Adelaide being his first, and only Italian wife. By his first two wives, Roger had more than ten children, including a few sons.

While married to Roger, Adelaide had two sons, Simon and Roger. She possibly was the mother of one of Roger’s many daughters, but it’s uncertain which one. Her husband died in 1101, and Adelaide’s eight-year-old son, Simon, became the new count of Sicily. Because of his young age, Adelaide ruled as regent.

Adelaide’s early regency was not to be easy. She was faced with some rebellions from her vassals. She proved a capable ruler when she put them down with great severity. Even though she dealt with rebels harshly, Adelaide was to become a widely respected ruler. To keep her position secure, Adelaide needed to have powerful allies to keep down her enemies. For this, she began a tradition of appointing high administers, who would go on to dominate the Sicilian court for much of the twelfth century.

Unfortunately, Count Simon died at the age of 12 on 28 September 1105.  Adelaide’s younger son, Roger, who was not yet 10 became the new count. He was known as Roger II of Sicily. Adelaide continued to be regent of Sicily. She seems to have been a popular regent throughout Sicily, a Greek-Arab charter from 1109 describes her as “the great female ruler” and “the protector of Christian faith.” Adelaide’s power, however probably did not extend over the entire island. Her charters issued during her regency were mostly from northeastern Sicily, suggesting that her influence was limited to those areas. At the beginning of her regency, the main residence of the Sicilian court was on the mainland.  During her regency, Adelaide herself decided to move to court to northeastern Sicily.

Around June 1112, Roger, now 16, began his personal rule of Sicily. Adelaide still continued to play a central role in the governing of Sicily, for her signature was still on official documents after 1112. Around the time her regency expired, King Baldwin I of Jerusalem negotiated for Adelaide to marry him. Baldwin was the second king of Jerusalem, and although he had married twice before, he still had no children. His first wife, Godehilde de Tosny, died childless in 1097. His second wife, who was traditionally called “Arda”, was an Armenian noblewoman. Her and Baldwin separated in 1105 because of their lack of children, and that Baldwin did not consider her family connections important in Jerusalem.

Apparently, Baldwin wanted to marry Adelaide because of her wealth.  Adelaide sailed to Jerusalem, and her and Baldwin were married in September 1113. Baldwin and the court of Sicily agreed if he was to die childless, Adelaide’s son, Roger would become King of Jerusalem. The marriage was met with some opposition, because Baldwin’s second wife was still alive, and some considered this marriage bigamous. In 1117, Baldwin’s advisers persuaded him to repudiate Adelaide, and she went back to Sicily in April 1117.

Baldwin died on 2 April 1118. Adelaide died in Sicily just two weeks later, on 16 April 1118, probably never hearing of her second husband’s death. Because of the annulment of the marriage, it was a cousin of Baldwin, not Roger, who became the new King of Jerusalem. The fact that Baldwin sent Adelaide back, greatly angered Roger, and for the rest of his life, he refused to aid the kingdom of Jerusalem and showed a strong hatred of it. Roger was crowned as the first king of Sicily in September 1130.

Birk, Joshua C.; Norman Kings of Sicily and the Rise of the Anti-Islamic Critique

Houben, Hubert; Roger II of Sicily: A Ruler Between East and West

About CaraBeth 34 Articles
I love reading and writing about the royals of medieval Europe- especially the women. My interest was first started by the Plantagenet dynasty, but I decided to dive deeper, and discovered that there were many more fascinating royal dynasties in medieval Europe. Other dynasties I like reading and writing about are; the Capets, and their Angevin branch in Naples and Hungary, the Luxembourgs, the early Hapsburgs, the Arpads, the Piasts, the Premyslids and many more!