Ekaterina, or Katya as she was known, was born in Moscow, Russia in 1847. Her parents were ex-cavalry captain Mikhail Dolgorukov and his wife, Vera Vishnevskaia. Katya was of high birth, her ancestor had founded Moscow in 1147 and her direct Dolgorukov family line was an ancient noble line which could be traced back the 1400s, and so the family had numerous dealings with royalty over the years. Tsar Alexander II of Russia was a friend of Ekaterina’s father, and Katya first met the Tsar when she was aged just twelve. 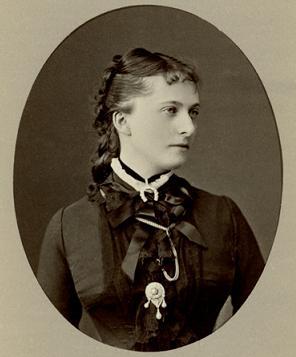 Katya’s father Mikhail died suddenly, leaving his wife and children with no income. Tsar Alexander stepped in and paid for the education of Katya and her siblings. In 1864 at the Smolny Institute, a school for girls of the nobility, Alexander fell in love with Katya while on an official visit. Alexander began pursuing Katya when he was nearing fifty, and she was just sixteen. Alexander began visiting Katya frequently, with visits become less formal over time and the headmistress encouraged the relationship between the Emperor and the school girl. Ekaterina liked to spend time with Alexander, but unlike many other girls she was not interested in becoming his mistress, and she ignored his romantic advances for the next year before the pair became sexually involved around 1866. The change in Katya’s feelings was apparently due to seeing the grief Alexander was going through after the death of his eldest son Nicholas.

Alexander had been married to his wife Marie of Hesse and by Rhine, since 1841 before he was Tsar. The marriage was a love match, but over time the couple had drifted apart, and after having eight children, her health began to deteriorate as she suffered from tuberculosis. The Tsar had kept mistresses in the past, but not in the same way as he treated Ekaterina, who he called his secret wife or the wife of his heart. The Tsar’s real wife Marie had to get used to her situation, and as she was often away for long periods spending time in spas, the lovers managed to see each other four times a week in private rooms of the Winter Palace.

In June 1867 Alexander, his sons and Napoleon III of France were ambushed while in their carriage and shot at. Everybody survived, but the Tsar was so shaken by the attack that he moved Katya much closer to the Winter Palace. Alexander would fall victim to such attacks many more times, and he believed it was Katya keeping him safe. Katya was made lady-in-waiting to Marie who was slowly dying.

The couple had a very close and loving relationship. Katya never used her position as mistress to gain favour at court and never wished to be part of royal circles; she simply loved the Emperor which many found hard to believe as he was over twice her age. Recently over 3000 letters written between the couple have been discovered, it is thought that they wrote to each other many times a day. The letters were full of personal jokes and often of a very sexual nature, quite uncommon for the period. Katya wrote one twenty-eight page letter willing the Emperor to be faithful to her during pregnancy. The couples’ passion for each other even resulted in doctors asking the Alexander to undertake a six week period of celibacy out of fear for his health.
By 1878 the relationship had resulted in the birth of four children; George, Olga, Catherine and Boris who sadly died at a few weeks old. The Tsar legitimised his children with Katya and loved them dearly.

In 1880 Alexander moved his second family into the Winter Palace itself, it was the only way he could protect them from constant assassination attempts. Alexander is remembered as a liberator of the serfs and for carrying out many domestic reforms including ending corporal punishment, but many people still wanted to overthrow the Romanov autocracy. As mistress and as a young liberal, Katya was seen as an instigator for some of these reforms which in some instances undermined the nobility, so there were many who did not like her including the Tsar’s family. The dying Empress Marie, wished to meet Ekaterina and her children, when she met the two eldest children, she blessed them, a moment which left her and her husband the Tsar in floods of tears. Months later Empress Marie died on the 22nd May.

Forty days after his wife’s death, Alexander married Katya. The Tsar had appealed to be able to marry her before the official year of mourning was over, because he feared that he would be assassinated and his second family would be left with nothing.  Alexander was fulfilling a promise he made to the young Katya fourteen years earlier to marry her as soon as he became free. Due to the couple’s different ranks, the marriage was morganatic which meant that Katya would not be called Empress and her children would not enter the line of succession. Katya was however given the title of Princess, and she was overjoyed at finally being able to marry Alexander.

Just a year after their wedding, the happiness of the couple came to an abrupt end; after escaping four failed assassination attempts, Alexander’s luck had run out. On 13 March 1881, Alexander was caught up in a series of explosions in St. Petersburg. Young members of the People’s Will movement had attacked the Tsar on his way to military roll call. The wounded Tsar was taken back to the Palace, where he lay dying when Katya came running in to see him. He died next to his new wife with her nightdress soaked in blood.

Katya was widowed at just thirty-three, due to her sour relationship with the Tsar’s family, she moved to France with her children, where she lived in self-imposed exile for the rest of her life. The widowed Princess lived comfortably in her own residence with a pension of 3.4 million rubles. This great sum afforded her and her children a wonderful lifestyle until her death forty-one years after her husband’s. Katya never remarried and remained devoted to the memory of Tsar Alexander II.