Louise Juliana of Nassau was born in Dordrecht on 31 March 1576 as the first of six daughters born to William the Silent by his third wife Charlotte of Bourbon. She was the first to be born in the Netherlands. 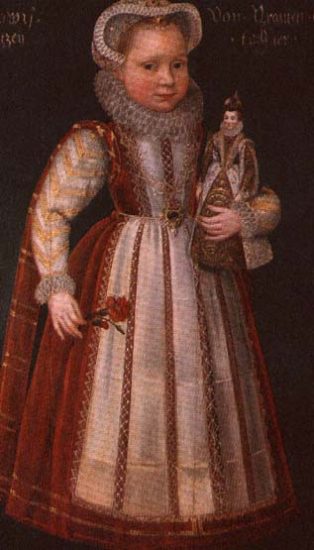 Louise Juliana was just six years old when her mother died from exhaustion after caring for her father after an assassination attempt. William remarried for a fourth and final time in 1583 but was assassinated in 1584. Louise was now an orphan. She was taken in by her stepmother, Louise de Coligny and she was raised in the Calvinistic teachings in The Hague.

At the age of 17, Louise Juliana was married to Frederick IV, Elector Palatine in a magnificent ceremony in Dillenburg. She received gifts of 10,000 guilders each from the States of Holland and Zeeland. Even the King of France gifted her 100,000 livres. The newly married couple settled at Heidelberg Castle, and Louise Juliana gave birth to eight children, but three children would die young. Despite their many children, it was apparently not a happy marriage, and Frederick liked to drink. This could be the reason why Louise Juliana sent her sons to the court of her sister Elisabeth.

Louise Juliana was widowed in 1610 when her eldest son was just 14 years old. John II, Count Palatine of Zweibrücken, the boy’s nearest Protestant male relative became his regent, while Louise Juliana acted as his advisor. Louise Juliana managed to find excellent partners for her children. Her eldest son married Elizabeth Stuart, daughter of James VI and I and Anne of Denmark, her eldest daughter married the above mentioned John II, Count Palatine of Zweibrücken, her youngest daughter married  George William, Elector of Brandenburg and became the mother of the Great Elector, while her youngest son married Maria Eleonora of Brandenburg.

When her son came of age in 1614, Louise Juliana settled in Kaiserslautern. She never agreed with his decision to accept the crown of Bohemia. She returned to Heidelberg in 1619 after her son left for Prague to once again advise the regent. She also cared for her grandchildren Charles Louis and Elisabeth and was forced to flee with them to Berlin when Frederick was driven from Bohemia.

Louise Juliana died in 1644 after a short illness. Her court preacher Frederik Spanheim wrote of her, “her court was a church and her life an example of justice.” 1