Elizabeth of Luxembourg was born on 7 October 1409 as the daughter of Sigismund, Holy Roman Emperor and Barbara of Cilli. She would be their only child.

She was the de facto heiress presumptive to the thrones of Hungary and Bohemia, although most expected that she would rule jointly with her husband. In 1411, her father managed to persuade the Hungarian estates to recognise Elizabeth’s right to the crown of Hungary and to elect her future husband as King.  When Elizabeth was 14, she was betrothed to Duke Albert V of Austria.

In 1418, Elizabeth’s mother was accused of adultery, and Barbara was banished and confined between 1418 and 1419. Elizabeth followed her mother into exile and endured the same harsh treatment, which is perhaps an indication that her father doubted her paternity. Her parents were eventually reconciled. 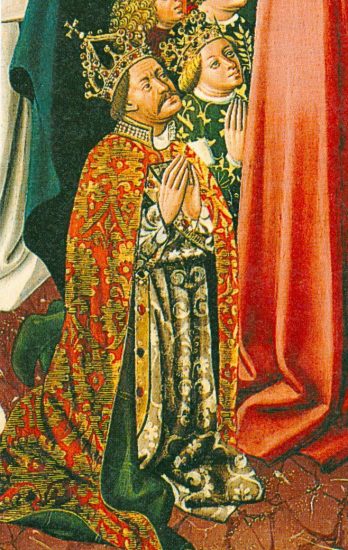 On 28 September 1421, the marriage treaty between Albert and Elizabeth was signed, and they married on 19 April 1422 in Vienna. Elizabeth moved to Vienna to live with her husband. Their first child, a daughter named Anne, was born in 1432. They had a son named George in 1435, but he died within three hours of his birth. They had another daughter named Elizabeth in 1436.

Elizabeth’s father died on 9 December 1437, and the Hungarian estates elected Elizabeth’s husband as King on the condition that he only govern “with her consent and approval.” Their coronation took place on 1 January 1438.

Albert died on 27 October 1439 and Elizabeth was pregnant with her fourth child, convinced that it was a son. Elizabeth ruled Hungary as a regent for the interregnum until the birth of her child. On 1 January 1440, Vladislaus of Poland was elected as King of Hungary. Officially, Elizabeth accepted the election, but she left Buda. On 22 February 1440, she gave birth to a son, and she had him crowned King of Hungary with the Holy Crown.  She met with Vladislaus in 1442, and they exchanged gifts. Elizabeth died shortly after the meeting and immediately poisoning was suspected. She was still only 33 years old and was buried in the Székesfehérvár Basilica.

Her longed-for son died at the age of 17, leaving no issue. In 1490, her grandson, through her youngest daughter, was elected as King Vladislaus II of Hungary.