Princess Astrid of Sweden was born on 17 November 1905 in Stockholm as the daughter of Prince Carl of Sweden, Duke of Västergötland and his wife, Princess Ingeborg of Denmark. She was their third daughter, following Margaretha and Märtha. A younger brother named Carl was born in 1911. Astrid’s education was strict and without much luxury. She attended the Sint Botvid boarding school, where lessons were taught in French. She then went to the Akerstrom-Soderstrom finishing school, which was also attended by her two elder sisters.

In 1922, the family encountered some financial difficulties when the Danish national bank went bankrupt. Princess Ingeborg had lost her entire fortune, and the family was forced to sell their beloved villa. They moved into the third floor of a mansion in the centre of Stockholm briefly before settled to Hovslagargatan, overlooking the water.

We don’t know exactly how and when Astrid met her future husband. The family travelled to Belgium in 1925. Astrid and Märtha were still unmarried, while Margaretha had married Prince Axel of Denmark in 1919. They met with Queen Elisabeth (born of Bavaria) but not with Leopold, then Duke of Brabant, who was in Congo at the time. It is assumed that their first meeting followed in March of 1926 when Queen Elisabeth travelled with Leopold to Stockholm. They met each other several times while Leopold told her about Belgium. On 21 September 1926, the engagement was officially announced, and their civil marriage took place on 4 November in Stockholm. The religious wedding was to take place in Belgium and Astrid would arrive there on 8 November by boat. The figure in white that waved towards the crowd with a white handkerchief spoke to everyone’s imagination.

On 10 November, their religious wedding took place in the Cathedral of Saint Michael and Saint Gudula in Brussels. The Roman Catholic service was altered for the Lutheran Astrid, and she agreed to raise their children as Roman Catholics. After these busy days, the couple left for their honeymoon in the south of France before moving into a wing of the Royal Palace in Brussels. After the honeymoon period, Astrid began studying French and Dutch. Dutch came more easily due to its Germanic connections to Swedish.

On 11 October 1927, Astrid gave birth to her first child, a daughter named Joséphine Charlotte. At the time, Belgium barred women from the succession, so a son was needed to secure it. It had been a tough period for Astrid, and she desperately needed to relax. At the end of 1928, the couple departed for the Dutch Indies, which had a much warmer climate. They would be six incredible months for Astrid. Upon their return, they moved into Stuyvenberg Castle. In 1930, Astrid, by her own free will, converted to Catholicism and was baptised while heavily pregnant with her second child. On 7 September 1930, Astrid gave birth to a son named Baudouin. Leopold barely made it home in time.

The couple once again went travelling in 1932, this time the destination was Asia. Their children stayed with Astrid’s parents in Sweden. At the end of the year, they also visited Congo. In early 1934, Astrid was pregnant with her third child, and it would prove to be a challenging year. King Albert died unexpectedly in a mountaineering accident on 17 February; he was still only 58 years old. Suddenly, Leopold and Astrid were the new King and Queen of the Belgians. On 6 June 1934, their third child, a son named Albert was born. She was now Queen and the mother of three young children. It was decided that the children would not receive a private education but instead would go to school with other children. Nevertheless, these other children would be from the nobility.

Astrid’s life was tragically cut short. On 29 August 1935, Leopold and Astrid had decided to go for one last hike during their vacation in Switzerland. Their driver accompanied them, even though Leopold was driving the car. The car slipped, and it appeared that Astrid attempted to open the door to jump from the car. However, the car hit a tree, and she was ejected from the car. She died on impact. Leopold had only minor injuries and had immediately rushed over to take her into his arms.

The Belgian public was grief-stricken. Their young and popular Queen was dead. Astrid’s body returned to Belgium by train. She would lay in state in the chapel of the royal palace in Brussels. Her funeral took place on 3 September 1935, and people lined the streets from Brussels to Laeken, where she would be interred in the royal crypt. The outpouring of love and mourning only confirmed Astrid’s place in the hearts of the Belgian people. 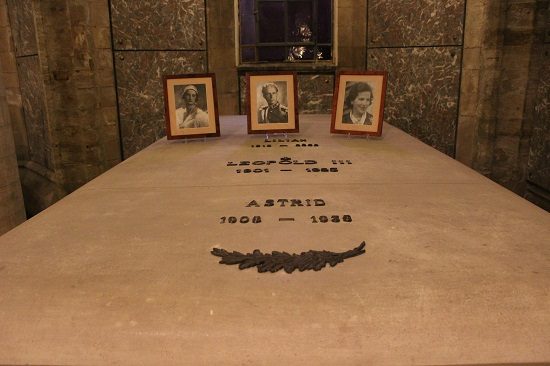 The place of the accident, Küssnacht am Rigi, became a place of pilgrimage, and a chapel was erected there. 1