Anne of Denmark was born on 12 December 1574 as the second child of Frederick II, King of Denmark and Sophia of Mecklenburg. Her father was reportedly so angry at the birth of a second daughter that he stormed into the birthing chamber to remonstrate his wife.

She was sent to live in Mecklenburg for the first four years of her life, before returning to Denmark, where she lived under her mother’s care until her marriage. She received a good education for a Princess of her rank.

In as early as 1586, the possibility of marriage was raised between Denmark and Scotland, but it wasn’t Anne who was the subject of debate, it was her sister Elizabeth. However, their dying father showed little interest in a match, and the Scots went home without a new Queen. Frederick died in 1588 and was succeeded by Anne’s brother Christian. Elizabeth became betrothed to the Duke of Brunswick-Wolfenbüttel in 1689, and the attention shifted to Anne. Her mother had taken over as matchmaker and negotiations were concluded quickly. Anne married James by proxy on 20 August 1589. 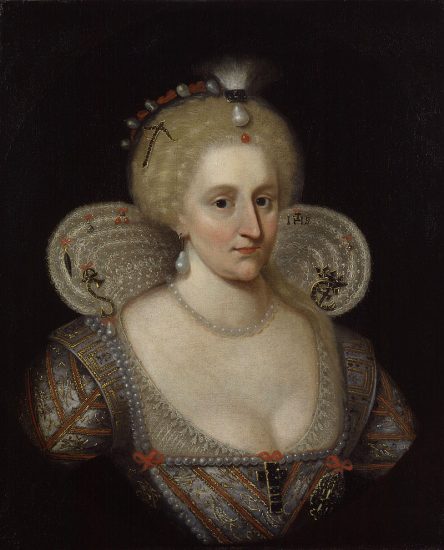 Anne set sail from Denmark on 5 September, but a storm scattered the fleet and Anne was stuck at sea for several days. The fleet was eventually forced to return to Denmark before setting off again. Once again, Anne didn’t make it to Scotland. On 24 September a public feast day was declared, and James ordered that prayers be said for Anne’s safe arrival. By early October, James despatched a ship to look for her and found her in Norway. Anne had been forced to go to Oslo to wait out the winter weather. James decided to go in person and sailed to Norway at the end of October. They were married in person in Oslo on 23 November, and during the ceremony, Anne was described as “a Princess both godly and beautiful … she giveth great contentment to his Majesty.” They travelled by sledge to Denmark, where Anne was reunited with her family. They spent three months in Denmark and even stayed for Elizabeth’s wedding.

Anne and James landed in Scotland on 1 May 1590, and she was given a grand ceremonial entry to Edinburgh, and she was crowned Queen of Scotland on 17 May. She may have converted to Catholicism within a few years of their marriage.

She gave birth to her first child in February 1594, a son named Henry Frederick. She was pregnant a total of 9 times, but she had two miscarriages, and four children died in infancy. Only Henry Frederick, Charles and Elizabeth survived to adulthood. Anne’s refusal to be separated from her eldest son, who was to be raised in Stirling Castle by the Earl of Mar, led to a hysterical episode which caused a miscarriage. 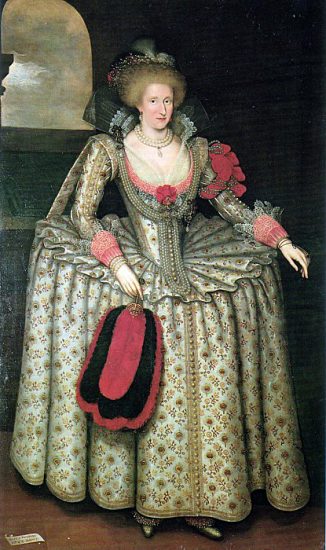 On 24 March 1603, James succeeded to the throne of England and immediately headed towards England. Anne followed him but more slowly. She stopped at Stirling Castle and demanded to see her son. After a furious discussion, Anne suffered yet another miscarriage, and she was even dangerously ill for a while. James wanted her with him in London and finally allowed her to travel to England with both Henry and Elizabeth.
Anne and James were crowned together on 25 July 1603 in Westminster Abbey, and Anne threw herself into her new role as Queen of England. She spent a lot of time producing and performing in masquerades, which became more costly as her husband’s reign went on.

Tragedy struck in 1612 when her eldest son died, and Anne never recovered from the shock. Her grief became even greater when her daughter Elizabeth left for Germany to be married in 1613. Anne’s relationship with James was cordial, but they rarely saw each other. Anne’s health began to steadily deteriorate, and over Christmas 1618 she was too ill to attend the court festivities. James was afraid of disease and refused to visit Anne, but her son Charles remained by her side. Anne died in the early hours of 2 March 1619 at Hampton Court Palace in the same chamber where Jane Seymour had died. 1