Anna of Saxony was born in 1567 as the youngest daughter of Elector Augustus of Saxony and Anne of Denmark. On 16 January 1586 Anna married Duke Johann Casimir of Saxe-Coburg in Dresden. She was known as fun-loving and appeared in magnificent court festivals. Her new husband was more reserved and usually spent several weeks away from court on hunting trips. Anna soon took a lover, Ulrich von Lichtenstein and when this was found out, Johann Casimir set about divorcing her. They were both imprisoned and sentenced to death. Anna wrote her husband confessing her guilt, „Er möge – so bat sie – eine arme verlassene Waise nicht ihre jungen Tage im Gefängniß zubringen lassen, sie wolle seine arme Dienerin und Magd sein.“ (Do not let a poor abandoned orphan spend her young days in prison, she wants to be his poor servant and maid), but it was no use. 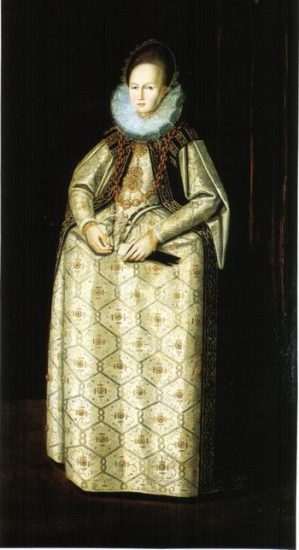 After receiving pleading letters from her relatives to show mercy, he commuted their sentences to life imprisonment. Anna would spend the rest of her in several prisons. She was initially imprisoned in Eisenach and was transferred to the Sonnenfeld Monastery in 1596. She died at the Coburg Veste in 1613 and was buried at Sonnenfeld Monastery. Ulrich died on 8 December 1633, days before his release was announced.

Johann Casimir remarried to Anna’s first cousin, Margaret of Brunswick-Lüneburg in 1599 and had a coin made for the occasion. One side showed a couple kissing with the inscription WIE KVSSEN SICH DIE ZWEY SO FEIN (A good kiss between two), and the other side had an image of Anna with the inscription, WER KVST MICH – ARMES NVNNELIN (Who kisses you now – Poor nun).