The death of Princess Charlotte of Wales in 1817 led to a race between her uncles to father an heir. As we know, the Duke of Kent was successful in this, with the birth of Victoria in 1819. But for a little while, Princess Elizabeth of Clarence, the daughter of the Duke of Clarence (later William IV) and Adelaide of Saxe-Meiningen was ahead of her in the succession.

Adelaide of Saxe-Meiningen had several children with the Duke of Clarence, but only Elizabeth survived. They had another daughter, who died just after being baptised, four stillborn children (including a set of twins) and Elizabeth.

Adelaide’s pregnancy with Elizabeth also didn’t go as planned. Apparently, Elizabeth was born six weeks early at St. James’ palace on 10 December 1820. Probably fearing she too would die, Elizabeth was christened the day of her birth. She died quite suddenly 12 weeks later on 4 March 1821 of an ‘intro-susception of the bowels’, most likely gastrointestinal junction. She was buried on 10 March 1821 in St. George’s Chapel at Windsor Castle. 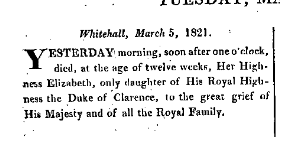 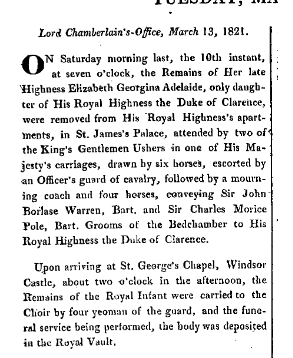 Adelaide suffered three more stillbirths after the death of Elizabeth. I imagine it must have been terrible for her. Despite this, it appears to have been a happy marriage. They were both fond of their niece, Victoria.

How different things might have gone had this little girl lived!