Gwenllian of Wales has perhaps one of the most tragic stories I have read in awhile. She was born in Abergwyngregyn, near Bangor in Gwynedd in June 1282. She was the only child of Llywelyn ap Gruffudd, Prince of Wales and Eleanor de Montfort. Eleanor was the daughter of Simon de Montfort and Eleanor of England, who herself was a daughter of King John of England. Thus, Gwenllian was a descendant of Welsh royalty and English royalty. Gwenllian’s mother died giving birth to her.

King Edward I of England conquered Wales a few months after Gwenllian’s birth, and her father was killed in battle. Her uncle became her guardian, but he was later captured and executed. 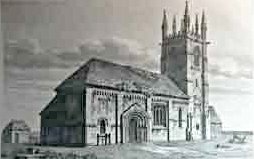 Gwenllian was imprisoned for life in the Gilbertine priory at Sempringham. The aim was, naturally, that by placing her in the priory that she would never marry and produce offspring that may threaten Edward I. The Gilbertine priory was particularly remote and the nuns were hidden from view behind high walls. Gwenllian never learned the speak Welsh and didn’t even know how to correctly pronounce and write her own name. Apparently, she signed her name as ‘Wentliane.’

Gwenllian would live for 54 years behind the walls of the Gilbertine priory before disappearing from the pages of history. She left no apparent mark on the world, except for the cruelty of the longevity of her imprisonment. We don’t even know where she is buried after the dissolution of the priory.

She does have a society dedicated to keeping her memory alive, and there’s even a memorial for her now. You can visit the Princess Gwenllian Society here.