In my previous article I discussed the early years of Elizabeth of Bosnia’s life, her life as queen consort, and her early regency.  This second part will focus on her fairly short, but eventful regency.

The Polish did not want to be in union with Hungary, and wanted their monarch to reside permanently in Poland.  Mary’s fiancé, Sigismund and his Luxembourg relations were unpopular in Poland, and they did not want to acknowledge him as their king.  In 1383, the Poles demanded that they would only accept a daughter of Louis to rule in Poland if she would reside there permanently.  Since Poland was far away from Elizabeth and Mary’s power base, it was unlikely that they could move there.

Before his death, the Polish promised to Louis that one of his daughters would succeed him in Poland.  Since Mary was no longer an option, this left his youngest daughter Jadwiga.  Elizabeth agreed with the Polish that Jadwiga would be their ruler.  However, she insisted that after Jadwiga’s coronation, she would return to Hungary for another three years before moving to Poland permanently.  But in 1384 the Polish could wait no longer.  They demanded that Jadwiga be sent to them, or they would choose someone else as their ruler.  Elizabeth, having no other choice, had Jadwiga sent to Poland, probably that summer.  Jadwiga was crowned “King of Poland” in October 1384 to show that she held the throne in her own right, and was not a mere consort.

In 1384, Elizabeth was already tied up with problems at home.  Not wanting Sigismund to marry Mary, she sent envoys to France to negotiate for a marriage between Mary and Louis de Touraine, who had once been betrothed to her deceased daughter, Catherine.  Many of Mary’s subjects were in favour of the marriage to Louis, but there were still some that wanted to honour the dead king’s wishes and have her marry Sigismund.  This caused even more instability to Elizabeth and Mary’s reign.

Meanwhile, nobles who were opposed to Mary’s rule were campaigning for Charles III of Naples to be the new king of Hungary.  Also known as Charles of Duruzzo, he was the last remaining adult male member of the Capetian House of Anjou- the dynasty Louis I belonged to.  In 1381, with Louis’ help, he deposed Queen Joanna I of Naples.  Soon afterwards he had her murdered.  Knowing the fate of Joanna, the possibility of Charles taking the Hungarian throne must have been terrifying for Elizabeth and Mary.

Sigismund knew that Elizabeth was trying to break his engagement.  He was also much closer to Hungary than Louis de Touraine, so he was more likely to invade the kingdom, and claim Mary as his wife.  However, Elizabeth got the Pope to annul Mary and Sigismund’s betrothal, and Mary and Louis were married by proxy in 1385.

Sigismund got his way in the end.  In the autumn of 1385, Charles of Durazzo had started his invasion of Hungary.  Sigismund was already there, and by marrying him, Mary’s position would be more secure against her enemies.  In October 1385, Elizabeth was left with no other choice than to allow Sigismund to marry her daughter if she wanted to prevent Charles from becoming king.  That month, Mary and Sigismund were married.  Meanwhile, marriage plans where changed for her other daughter, Jadwiga.  Her betrothed, William of Habsburg was unpopular in Poland, and the Polish nobles had the betrothal broken.  Instead, Jadwiga was married to Jogaila of Lithuania in February 1386.

By the time Mary and Sigismund married, Charles of Durazzo had arrived in Hungary, and had a large number of supporters in Hungary and Croatia.  Sigismund fled to his brother in Prague, and Mary was forced to abdicate, and Elizabeth resigned as regent.

Possibly fearing for their lives, Elizabeth and Maria stepped down quickly, and Charles was crowned as King of Hungary and Croatia on 31 December 1385.  Elizabeth and Maria were forced to attend his coronation at the Szekesfehervar Basilica.  It is said that during this ceremony the deposed Queens wept at the tomb of Louis I. 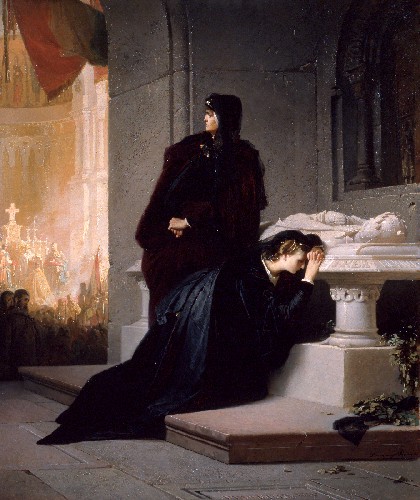 Charles was not king for long.  His Italian supporters who accompanied him soon went home, leaving Charles nearly defenceless.  Elizabeth invited him to visit her and Mary at Buda Castle on 7 February 1386.  There, he was stabbed in Elizabeth’s presence, the attack being ordered by Garay and Elizabeth herself.  Severely wounded, Charles died on 24 February.  Mary was immediately restored as Queen and Elizabeth as regent.

Soon after Charles’ death, his supporters recognized his young son Ladislaus, as the true king of Hungary and Croatia.  Civil war broke out again.  In July 1386, Elizabeth and Mary, with a modest following set out to Croatia, to deal with the rebels.  Elizabeth did not realize how dangerous this situation really was.  On 25 July, the queens’ party was ambushed by the rebels.  Their small army was slaughtered, and so was Garay, whose head was sent to console Margaret of Durazzo, Charles’ widow. Elizabeth took the blame for the recent strife and begged the attackers to spare Mary’s life. 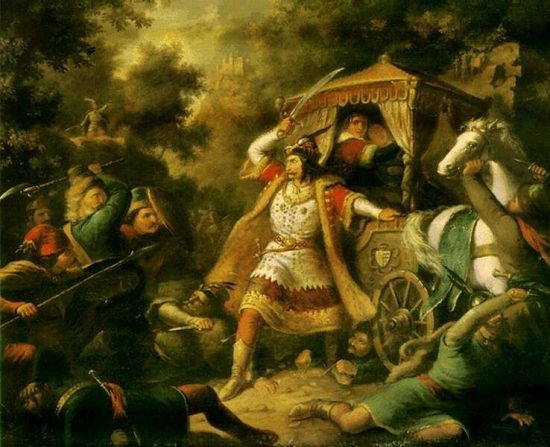 Elizabeth and Mary were first imprisoned in their enemies’ castle of Gomnec, and then moved to Novigrad Castle, on the Adriatic coast.  Elizabeth was tried and was found guilty of Charles’ murder.  She was then sentenced to death, apparently on the suggestion of Margaret of Durazzo.

In January 1387, Sigismund was marching towards Novigrad to save Mary.  Meanwhile, Elizabeth was smuggling plans with the Venetians, to help her and Mary escape.  When the queens’ captors discovered this plan, they strangled Elizabeth -in Mary’s presence- soon before 16 January 1387.  Her body was hung from the tower of the castle.

Sigismund took advantage of the anarchy in Hungary and Croatia, and was crowned as King that March.  Sometimes Sigismund himself is believed to be behind Elizabeth’s death.  In June 1387, Mary was released.  She took no further part in government and Sigismund remained as Hungary’s ruler.  However, Mary had John Horvat, who she believed guilty of Elizabeth’s murder, tortured and executed in 1394.  Tragically, Mary died in a riding accident in 1395, and Sigismund remained as King of Hungary for the rest of his life.

Elizabeth has not been treated kindly by history.  She is often blamed for the anarchy in Hungary and Croatia during her reign.  She is sometimes seen as a tyrant, but how she dealt with her enemies is no worse than how many of her male contemporaries dealt with theirs.  Elizabeth was definitely ambitious, but she was also a widowed queen mother stuck in a precarious position, trying to do what she thought was best for her and her daughters.  Largely forgotten today, Elizabeth was one of the most powerful women of her day.  Her dramatic and tragic story is one in need of more attention today.

Bak, Janos M.; “Queens as Scapegoats in Medieval Hungary”  in Queens and Queenship in Medieval Europe

Dautovic, Dzenan; “Relations between Bosnia and Hungary through the prism of the Marriage between Louis the Great and Elizabeth, the Daughter of Stjepan II Kotromanić”

Fine, John V. A. JR.; The Late Medieval Balkans: A Critical Survey from the Late Twelfth Century to the Ottoman Conquest

Halecki, Oscar; Jadwiga of Anjou and the Rise of East Central Europe

About CaraBeth 35 Articles
I love reading and writing about the royals of medieval Europe- especially the women. My interest was first started by the Plantagenet dynasty, but I decided to dive deeper, and discovered that there were many more fascinating royal dynasties in medieval Europe. Other dynasties I like reading and writing about are; the Capets, and their Angevin branch in Naples and Hungary, the Luxembourgs, the early Hapsburgs, the Arpads, the Piasts, the Premyslids and many more!