Sophia Magdalena of Denmark was born on 3 July 1746 as the daughter of King Frederick V of Denmark and Louise of Great Britain. At the age of five, she was betrothed to the future King Gustav III of Sweden. They finally married on 1 October 1766 by proxy and on 4 November 1766 in person.

When Gustav’s father King Adolf Frederick of Sweden died in 1771, she and Gustav became King and Queen, but they were still childless as the marriage remained unconsummated. Gustav’s brother Charles was duly married off to Hedwig Elizabeth Charlotte of Holstein-Gottorp in 1774, in a second attempt to secure the succession. Hedwig believed herself to be pregnant in 1775, but an examination proved otherwise, and Gustav realised he may have to secure the succession himself. He and Sophia Magdalena were still young enough to have children. Sofia Magdelena had even acquired the unfortunate nickname, “the crowned virgin.” Gustav resolved to reconcile with his wife, but their relationship had been distant from the start, not in the least helped by his mother’s disdain for the match. His mother, Louise Ulrika of Prussia, had written to her brother Frederick II of Prussia, “Another circumstance makes the dire situation (the death of her husband) in which I find myself even worse, it is this ill-matched marriage which is backed by the factions.”

Sofia Magdelena had led a solitary life, first as Crown Princess and later as Queen. She had spent most of her time closed up in her apartments in the company of her Danish ladies-in-waiting. She was terribly shy and was not interested in the political affairs of the country. Gustav sent in his first squire, Adolf Frederik Munck, in an attempt at mediation.

Gustav sent in his first squire, Adolf Frederik Munck, in an attempt at mediation and Munck successfully convinced Sofia Magdelena to reconcile with Gustav. They began to exchange romantic letters and were perhaps happy in their marriage for the first time. The time had come to spend the night together. In the memoirs of Fersen, he reports that Munck undressed the King for the coucher and left him alone with Sofia Magdelena. Munck waited at the door, but soon Gustav came to him and confided that it was impossible for him to perform his marital duty. Munck then came back into the room and instructed the King until the marriage was consummated. When this became known, it was widely mocked by cartoons such as below. 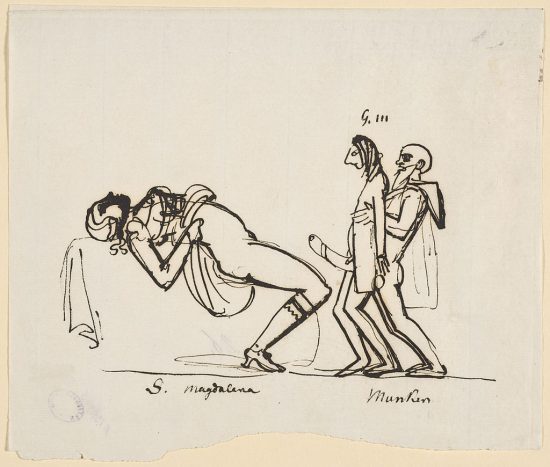 Gustav had requested that there be absolute discretion regarding his rapprochement with his wife. The mystery surrounding their encounters only added to the rumours that Munck had been more involved and that Sofia Magdelena was having an affair with him. In February 1778, 12 years after their wedding, it was announced that Sofia Magdalena was expecting their first child. One who was certainly not happy about it was Gustav’s brother Charles. It is likely that the initial rumours about the affair came from his entourage. The future King Gustav IV Adolf of Sweden was born on 1 November 1778. Charles blamed his mother for the spread of the rumours as it was already widely known that Louise Ulrika did not like her daughter-in-law, who she called, “La Danioise” or “The Dane.” Gustav refused to believe the rumours and seriously considered exiling his mother to Pomerania. Frederick II quickly wrote to Gustav, “A son must always preserve respect for the author of his days, and his feelings of gratitude must be endless in his heart” and he later added, “What a scandal in Europe if my sister is exiled by her own family!” She was eventually made to sign a document that she was convinced that the rumours surrounding Sofia Magdelena were false.  Louise Ulrika was then isolated at her residence of Fredikshov, and the relationship with her son remained distant for the rest of her life. 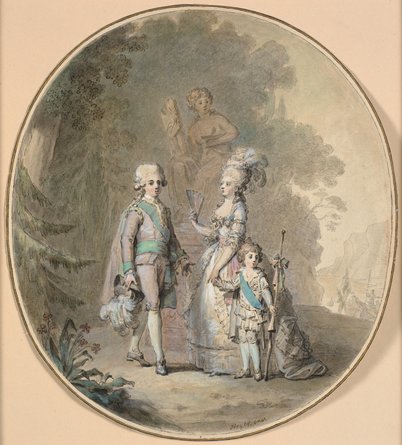 Gustav and his four-year-old son finally visited his mother, but Sofia Magdelena was pregnant once more and conveniently used the excuse to get out of the meeting. She had been furious with her mother-in-law. Louise Ulrika died not much later at the age of 61. A second son was born in 1782, but he lived for only a year. They would have no more children.

Sofia Magdalena was widowed on 16 March 1792 when Gustav III was murdered. The conspirators had planned to make her regent. However, Sofia Magdelena was relieved to be able to retire from public life. She was close to her son, who visited her often. She lived in the Royal Palace in Stockholm during the winter and at Ulriksdal Palace during the summer.

She was deeply affected by the deposition of her son in 1809 and never saw him again. He was sent into exile and was replaced by his uncle, Charles. Sofia Magdalena remained in Sweden. She even met Jean Baptiste Bernadotte, who eventually became Charles XIV John of Sweden, who she only met because he was not the one who deposed her son.

She died on 21 August 1813 and was buried in Riddarholmen Church. 1