Nur Jahan 1 was born 31 May 1577 in Kandahar as the daughter of Mirza Ghias Beg and his wife, Asmat Begum. Shortly before her birth the caravan her family had been travelling in was robbed, leaving the family penniless. According to some accounts they were forced to abandon her by the side of the road, but she was picked up by another one in their caravan. He was supposedly so struck by her beauty that he promised the family they would never be poor again. 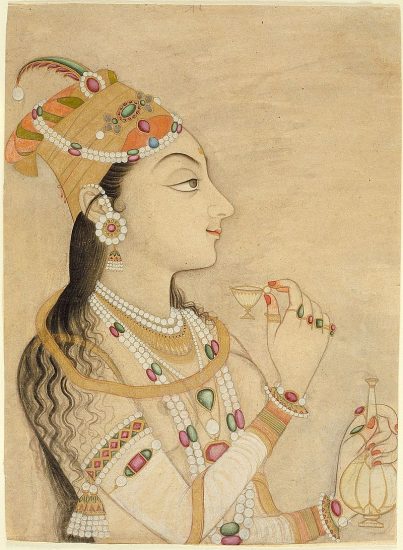 Her father was appointed a treasurer for the province of Kabul, and he quickly rose through the ranks. Due to this, she had an excellent education. She was married at age 17 to a Turkish soldier named Sher Afgan, governor of Bihar. They had no children, but she was the stepmother to a daughter from Sher Afgan’s previous marriage.  She was still married when Prince Jahangir, son of Emperor Akhbar, fell in love with her. Two years later Jahangir succeeded his father as emperor, and Nur Jahan was widowed.

In 1607 Nur Jahan and her stepdaughter were summoned to court to act as ladies-in-waiting to Empress Ruqaiya Sultan Begum, Jahangir’s stepmother. They served in this position for four years. In 1611 she again met the Emperor during the spring festival of Nowruz, and he proposed marriage immediately. They were married on 25 May 1611. She was Jahangir’s twentieth and last wife. The number of children attributed to them is confusing. Jahangir certainly had plenty with his other wives, but it’s impossible to identify Nur Jahan as the mother of any of them. She received her name Nur Jahan from her new husband, meaning “Light of the world.” She had great influence over him, and she effectively wielded the imperial power due to his addiction to opium and alcohol.

Nur Jahan’s father was appointed prime minister, and various members of her family were placed in high offices. She also arranged for her stepdaughter to marry Jahangir’s youngest son Shahryar and her niece married his third son Khurrem (Later better known as Mumtaz Mahal and Shah Jahan). 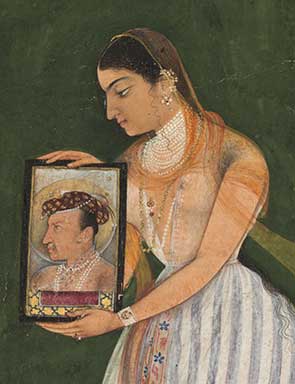 She was known as a “tiger-slayer” after taking down four tigers with six bullets during a single hunt. In 1522 Khurrem raised an army against Nur Jahan and his father. The rebellion was defeated, and Khurrem was eventually forgiven in 1626. The relationship between Khurrem and Nur Jahan remained tense. In 1626 Jahangir was captured by rebel forces. Nur Jahan organised an attack on the rebels and led them herself. She fell during the battle and was forced to surrender. She was held captive together with her husband. She soon managed to organise an escape, but Jahangir died not soon after on 28 October 1627 without naming an heir, leading the country into a war of succession. Khurrem was only the third son, but Jahangir’s eldest son was blinded after a rebellion and the second son was weak and addicted to alcohol. Shahryar was Nur Jahan’s stepson-in-law, but he was the youngest son.

Nur Jahan sided with Shahryar, whom she believed could be more easily manipulated. They were on the winning until they were betrayed by Nur Jahan’s brother. Shahryar was executed, and Nur Jahan was ordered into confinement. Shah Jahan became the new Mughal Emperor in 1628. Nur Jahan would spend the rest of her life in confinement, together with her stepdaughter Shahryar’s widow. She died on 17 December 1645 and is buried in Lahore.