Alexandra of Denmark was the consort of King Edward VII of Great Britain and Ireland. As Edward’s wife, Alexandra was a Queen and also Empress of India, making her one of the most powerful women in the world. As a Princess in Denmark however, her life had been quite different.

Alexandra was born into the Danish royal family, but her familial line was a junior branch, and her upbringing was a modest one when compared with other royals in Europe. Alexandra shared a small attic bedroom with her sister Dagmar, and the pair had to make their own clothes as the family of eight were living off just their father, Prince Christian’s £800 per year salary from his army post.

Alexandra was elevated in status in 1852 when her father was named the heir to the childless King Frederick VII. Upon the death of Frederick in 1863, Alexandra’s father received the Danish crown and the region of Schleswig-Holstein, becoming King Christian IX of Denmark.

Around the same time in Great Britain, Queen Victoria and Prince Albert were searching for a bride for their eldest son Prince Albert. Victoria wished to find a German bride for her son, but could not find anybody suitable. Albert’s older sister Vicky suggested that her brother should marry the young and beautiful Danish Princess Alexandra and despite tensions at the time between Prussia and Denmark, Victoria and Albert agreed on the match. The only problem was that Bertie, the playboy prince was not ready to settle down and was smitten with the actress Nellie Clifden. Prince Albert decided to visit his son in order to settle the matter once and for all but sadly passed away from typhoid fever, which he contracted during the visit. 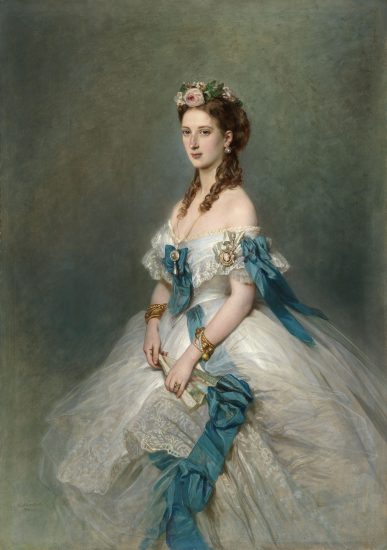 The death of Prince Albert, Queen Victoria’s beloved husband, cemented the union between Bertie and Alexandra. Queen Victoria was convinced that her husband’s death had been caused by the stress brought about by their son’s scandalous actions and so the prince eventually agreed on the marriage. The couple married in a quiet ceremony at Windsor Castle on 10 March 1863. Any idea of a spectacular public event was put aside due to the Queen still being in deep mourning for her husband. Despite the lack of official public celebrations, the people of Great Britain were generally overjoyed, they loved Princess Alix and showered her with affection.

Alexandra and Edward’s marriage saw the creation of the Marlborough house set and a new type of London high society. The couple were more down to earth than Queen Victoria was and brought a sense of fun to the royal family. Alix knew how to behave like a true Princess. However, she was well-educated, polite and had a wonderful presence. Sadly few of Alix’s mannerisms rubbed off on her husband, and she was unable to tame his lust for drinking, gambling and women. Alexandra had to learn to share her husband with a string of society women who lived as Edward’s mistresses even during his reign as king.

Within a year of her marriage to the Prince of Wales, Alexandra’s life was unrecognisable. She was destined to be queen consort of Great Britain and Ireland, her father had been crowned King of Denmark, her sister was engaged to the Tsesarevich of Russia and her brother George was elected as King of Greece. On top of all of this, Alix added to the dynasty by giving birth to her first child Albert Victor in 1864.

Alexandra and Edward went on to have six children together, but pregnancy and childbirth were not easy for the Princess and her health was damaged more and more with each pregnancy. It is believed that all of the children were born prematurely, with Albert Victor arriving a full two months earlier than planned. The birth of Princess Louise triggered a bout of rheumatic fever which left Alexandra with a limp for the rest of her life (many society ladies decided to copy the limping walk, and it sparked a rather odd new trend). These health problems plus a pre-existing condition which caused her hearing to decline meant that Alexandra was often isolated from court life and found herself at her happiest when she was at home with her children.

Alexandra’s deepest unhappiness came with the death of her eldest son Albert Victor, who died at the age of 28. Alix commented that she had buried her happiness along with her son. The death of Albert also changed the succession, meaning George was now in line to succeed the throne after his father.

Alexandra was a popular princess and an even more popular queen. She paved the way for the type of royal family we have today, she poured her efforts into charity work and public functions and was happy to spend time with her subjects. Queen Victoria was glad to have Alix on hand to help, and she said that Alix worked hard to “spare me the strain and fatigue of functions”. It was clear that Alexandra enjoyed the type of royal duties that many others in the family did not. Her transition into the role of Queen in 1901 was a smooth one as she was already filling many of the Queen’s roles beforehand. 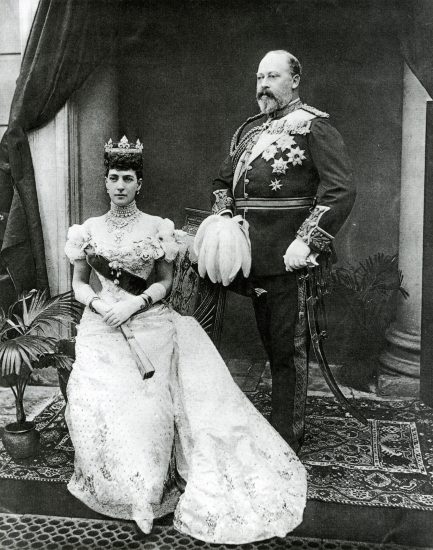 Alexandra and Edward were crowned together in August 1902, the coronation having been delayed by the king falling ill with appendicitis. After the coronation, life continued as normal for the new king and queen. Alexandra spent a lot of time caring for her grandchildren and enjoyed the domestic life, whereas Edward was spending more and more time with his mistress Alice Keppel. Alix did step out of her domestic bubble often enough to attend numerous functions, assist her husband with foreign affairs and also to visit the House of Commons, becoming the first Queen consort in history to do so.

In 1910, Queen Alexandra was overseas in Greece on a visit to her brother when she received news that her husband was unwell. The King had been suffering from bronchitis which led to his early return from a trip to Paris. Alix arrived back in England just in time to say goodbye to her husband, who suffered a series of heart attacks and died on 6 May 1910. Alexandra was so kind-hearted that she allowed her husband’s mistress Alice to visit him on his deathbed, she understood the king’s love for his mistresses but commented that “after all, he loved me the best”.

Alexandra retained much of her power after the death of Edward VII, her son George succeeded as King George V, and so she lived out the rest of her days as Queen Mother. Alexandra lived through the First World War which ripped Europe apart. She had always been wary of Germans and was happy when her son decided to change the family name to the House of Windsor in order to sever connections to Germany during the war. The war also caused the fall of the Romanov dynasty in Russia, which led to the murder of Tsar Nicholas II (Alexandra’s nephew) his wife and his five children. A whole branch of Alexandra’s family had been wiped out and although her sister was rescued, the tragedy deeply affected the Queen mother who was left exhausted by the war.

Alexandra of Denmark died on 20 November 1925 at Sandringham house. A heart attack ended the life of the beloved Alix at the age of eighty. She was buried next to Edward VII at Windsor Castle where they were married over sixty years earlier, in a very different Europe to the one she left behind. 1