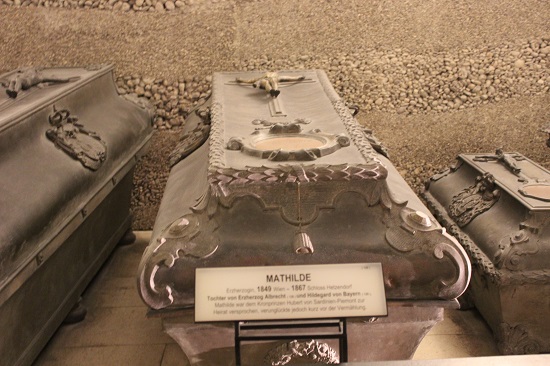 As you may remember, I went to Vienna last October, and while there I visited the Kaisergruft also known as the Imperial Crypt. There are of course many interesting people buried there, but I noticed this one in particular. The name listed is simply Matilde, and she died at the age of 18. I began to wonder what had happened.

Archduchess Mathilde of Austria was born on 25 January 1849, and she was a great-granddaughter of Leopold II, Holy Roman Emperor through his son Archduke Charles, Duke of Teschen and his son Archduke Albrecht, also Duke of Teschen. She has a pretty impressive family tree. She is also a granddaughter of Ludwig I of Bavaria, and she’s related to Charles III of Spain. Matilde’s mother was Princess Hildegard of Bavaria, and she was her parents’ third child. Matilde was born in Vienna, where her family spent most winters. They were apparently quite close to the imperial family.

Archduke Ludwig Salvator had wanted to marry her, but an engagement never materialised. To improve the relations with Italy Matilde was intended as a bride for Umberto of Savoy. He married Margherita of Savoy a year after Matilde’s death.

Not much is known about her private life, though an obituary mentions a lively interest in arts and sciences. She visited galleries and art exhibitions in Vienna and frequently visited the theatres. 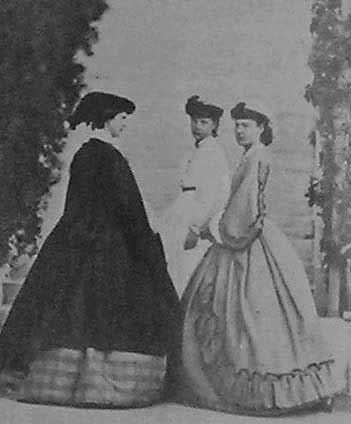 There are several possibilities as to what could have caused the events of 22nd of May 1867. Matilde was supposed to attend a gala evening at the theatre that night.The most accepted possibility is that the gauze of her dress caught fire when she intended to hide a cigarette from her father. The subsequent burning of the dress caused second and third-degree burns on her legs, back, neck and arms. She apparently survived the initial incident, but since treatment for burns was not as available as it is today, she died on 6 June 1867 at Schloss Hetzendorf. The fire and her later death were witnessed by several members of her family.

I must note that I am not certain of the dates here. The Wikipedia page for Matilde gives the impression her death was instant on 6 June, while another source states it happened on May 22nd, and she died several days later.

I found the May 22nd date in Harper’s Weekly which says,

‘On the 22d of May, as she was standing at a window in the palace in Vienna, talking with her young cousin the Archduke FREDERICK (Archduke Friedrich, Duke of Teschen?), she suddenly felt a burning heat, and screamed out. Her attendants hastened toward her, and perceived that the unfortunate lady was in flames. From some cause unknown, for it is said there was neither fire nor light in the room, her clothes had taken fire, and her back, arm, neck, and the lower extremities were seriously burned before the flames could be extinguished. It was supposed that she must have trodden on a match which had been carelessly dropped on the floor. At the same time of the accident the worst results were apprehended, in consequence of the inflammation that supervened, but a few days later it was announced that the unfavourable symptoms were subsiding, and hopes of her recovery were entertained. The prolonged suffering was, however, too much for her system, and she expired on June 6, at eight o’clock.’

Considering there are two weeks between the day it supposedly happened and the day she died her suffering must have been unimaginable. However, both possibilities are horrendous. 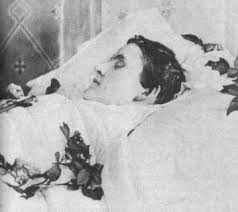 Matilde on her deathbed